The State Department issued a travel warning Monday to alert U.S. citizens in or traveling to Iran of the danger of their capture.  The warning comes after Iran has made detaining Americans a priority following the controversial news that the U.S. gave $400 million to the Islamic Republic on the same day they released U.S. military prisoners.

The statement says, “U.S. citizens traveling to Iran should very carefully weigh the risks of travel and consider postponing their travel.”

It specifically states that “Iranian authorities continue to unjustly detain and imprison U.S. citizens, particularly Iranian-Americans, including students, journalists, business travelers, and academics, on charges including espionage and posing a threat to national security.” It warns that “Iranian authorities have also prevented the departure, in some cases for months, of a number of Iranian-American citizens who traveled to Iran for personal or professional reasons.” 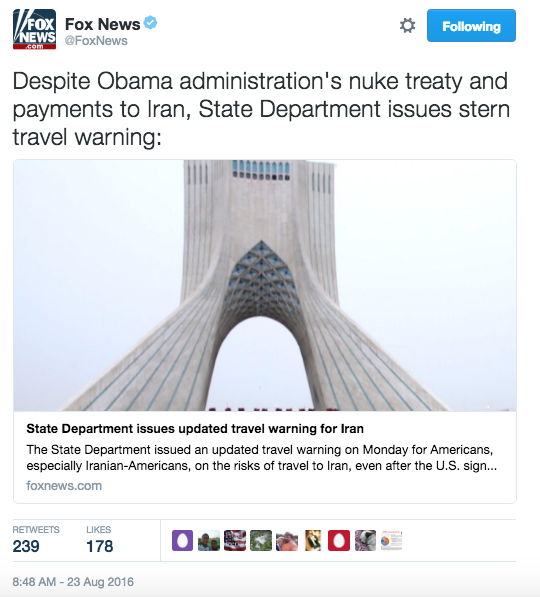 The statement acknowledges that Iran, an Islamic Republic, has been known to repress minority groups such as Christians, Baha’i, Arabs, Kurds, and Azeris and that it continues to do so.   The warning says that the areas within the country where these minority groups reside are incredibly unsafe.  It also says that “former Muslims who have converted to other religions, religious activists, and persons who encourage Muslims to convert are subject to arrest and prosecution.”

Furthermore, it says that “the U.S. government is concerned about the risks to civil aircraft operating into, out of, within, or over Iran due to hazards from military activity associated with the conflicts in Iraq and Syria. The FAA has advised U.S. civil aviation to exercise caution when flying into, out of, within, or over the airspace over Iran.”

The warning also advises travelers that if they were to get caught in a bad situation that “the U.S. government’s ability to assist U.S. citizens in Iran in the event of an emergency is extremely limited.”

The statement comes just after the latest controversy that the U.S. detainees were held on the ground until an airplane holding $400 million dollars in cash that was allegedly sent to resolve an outstanding financial dispute touched down in Iran.  Though the Obama Administration has repeatedly denied the payment was “ransom”, they admitted the delivery of the cash was contingent with the release of the prisoners.

While the Obama Administration continues to deny that Iran holding detainees until hundreds of millions of dollars in cash was handed over was ransom, there is no doubt that the facts together seem allude to the fact it was a form of ransom.  While U.S. citizens who are critical of the Administrations lack of transparency believe that to be the case, the latest travel advisory warning Americans of their possible capture if they travel to Iran would lead some to think Iranian officials believe the payment was a form of ransom as well.