According the Daily Sabah, a media entity run by current President Erdogan’s family, Turkish authorities have arrested and imprisoned U.S. citizen, Lindsey Snell (Sabah refers to her name as ‘Snell Lindsteyler’) who stands accused of crossing the border into Turkey illegally.

On August 5, 2016, the United States mobilized a team to extract Ms. Snell, who was subsequently wounded in Syria (it is speculated that her injuries were sustained from her time in an Al Nusra prison where she ultimately escaped on August 5, 2016).  The United States Consul General, Linda Stuart Specht, requested assistance in rescuing Ms. Snell from the Hatay (Turkey) governor’s office and evacuate her to Incirlik Air Base.  The U.S. Consul General’s request for assistance to rescue and evacuate Ms. Snell included several U.S. aircraft, manned and unmanned, who searched for Ms. Snell to no avail. 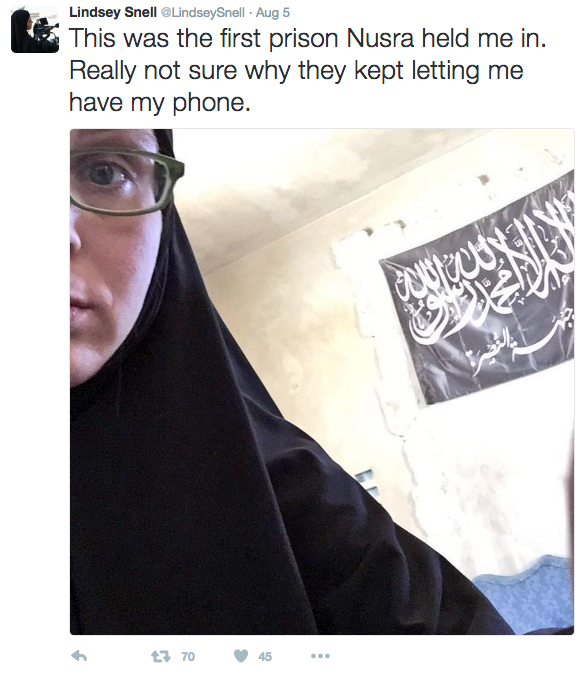 Photo Tweeted by Snell from inside prison.

A Turkish soldier on the border of Syria noticed movement on the border region where a wounded Ms. Snell revealed herself and placed her hands above her head and was taken into police custody immediately.  A Turkish prosecutor reported that Ms. Snell attempted to cross the border illegally and she was convicted of entering a Turkish military zone only a few hours later.  Ms. Snell’s harrowing ordeal started in an Al Nusra prison in Syria where she escaped with the aid of a man on a motorcycle (according to her tweet).

Snell has not tweeted since releasing the following photo on August 5, 2016. 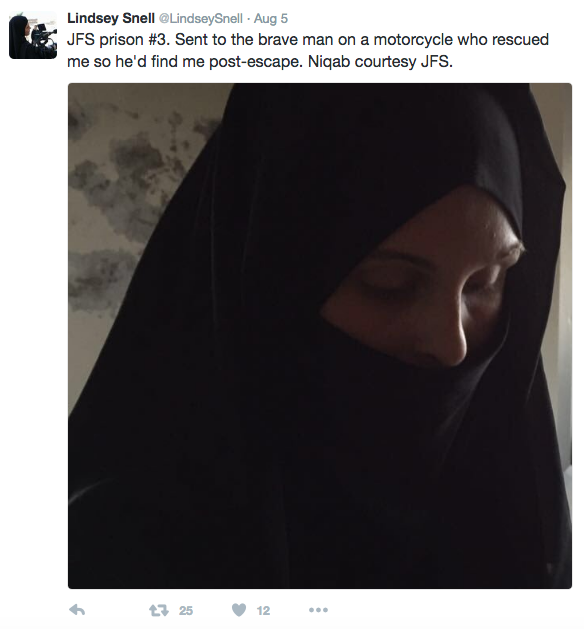 Her trial is ongoing according to Hatay Governor Ercan Topaca. He told albawaba.com:

“A US journalist was captured while she was trying to cross the border illegally; she was taken to court and remanded. The trial phase is ongoing. For now, we do not know if she is a spy or not,”