Michael Cthulhu, a skilled blacksmith, creates some of the biggest and wildest weapons in the world (UNILAD/Facebook)
August 26, 2016 Wade Bennett
Share
Tweet
Flip

Becoming a master blacksmith takes an immense amount of skill, talent, and dedication to the craft. Dating back to ancient times, blacksmiths were vital in creating not just weapons, but everyday objects as well.

Nowadays, many talented blacksmiths create amazing weapons with insane capabilities. Michael Cthulhu, who goes by his online name Michaelcthulhu, showed off some of the seriously impressive weapons he has created over the years, and seeing them in action is an incredible sight. 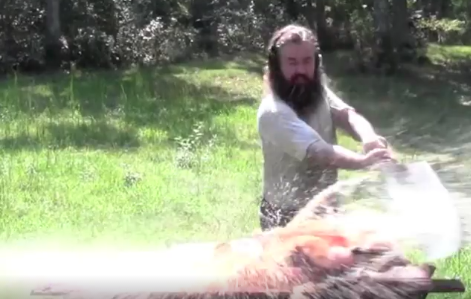 In videos posted online, Cthulhu shows his creations slicing through fruit, chopping down wood and even smashing through glass.

Check out some of Cthulhu’s weapons in the video montage below, which has more than 56 million views:

In the video, Cthulhu can be seen wielding some incredible and absolutely massive weapons that look like they might be better suited for a fantasy character. He cuts through a stump with a blade the size of an ironing board, slices a whole watermelon completely in half with one swing and swings his blade through a fish tank filled with water.

Not only are his oversized weapons incredibly deadly, they are also beautiful works of art. Some of his creations include incredibly detailed parts and pieces that make them almost too special to use in battle. 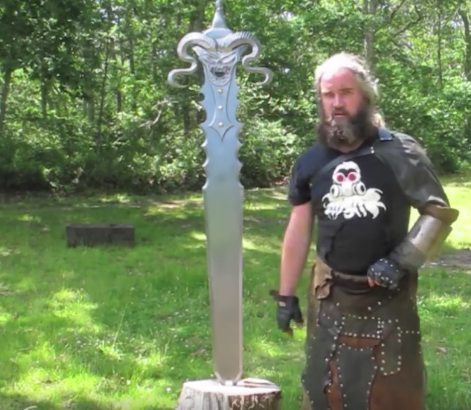 In addition to huge weapons that can slice a full grown man in half, Cthulhu also builds delicate and intricate miniature weapons as well.

His talents seem to have no limits as he shows off some of the ways in which his creations come to life. From forging them in fire, to twisting and molding the metals, Cthulhu has proven himself to be a highly skilled blacksmith. 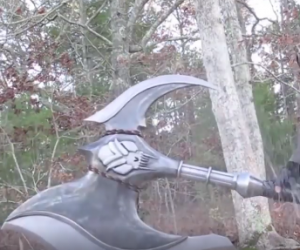 According to the video, many of Cthulhu’s creations are made upon request by customers. Individuals often want famous weapons from movies or video games recreated, or they might even come up with an idea of their own. Cthulhu makes these dreams a reality for people around the world.

While Cthulhu regularly posts videos of his wild weapons in action, he also uploads videos outlining the process of making them as well. His YouTube channel has gained more than one million subscribers with his most popular video racking up more than 10 million views.