A local California Bay area police academy wants 49ers backup QB Colin Kaepernick to see what kind of training police officers have to go through before become a part of the police force. 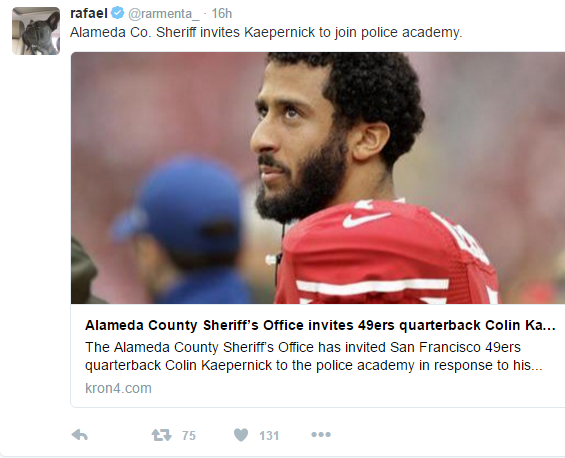 Kaepernick, who was fined back in 2014 for the use of the “N-word,” decided not to stand for the national anthem during preseason football games to protest police violence and “police brutality” against the black community.

“You can become a cop in six months, and don’t have to have the same amount of training as a cosmetologist, that’s insane,” Kaepernick said in a post-game interview. “Someone that’s holding a curling iron has more education and more training than people that have a gun and are going out on the street to protect us.”

The Alameda County Sheriff’s Office responded to Kaepernick’s comments by inviting him through a Facebook post, to visit the Alameda County Regional Training Center to see what their training is like:

During a post-game interview on August 28, 2016, you stated the following: “You can become a cop in six months, and don’t have to have the same amount of training as a cosmetologist, that’s insane. “

We would like to cordially invite you to the Alameda County Regional Training Center (RTC) in Dublin, CA. The RTC is currently in session hosting our 156th and 157th basic police academies. In addition to the academy, we train thousands of law enforcement officers from throughout the state and country in all aspects of our profession, including use of force. We have a specially designed Use of Force simulator that puts officers in situations where they must make split second decisions on what actions to take. In addition, we invite you to meet with our current academies and veteran officers to talk to them about their experiences and yours.

We hope that you will take this opportunity to meet with a new generation of law enforcement officers and have an open dialogue.

The Deputies of the Alameda County Sheriff’s Office

Spokesman J.D. Nelson said that deputies go through intense background checks and have more than 1,000 hours of training after leaving the academy, KRON-4 local news reported. Nelson also mentioned that deputies don’t control the streets until they have had at least two years of training and employment at the county jail.

He said that Kaepernick’s comments were “unfair” since he is not familiar with the training police officers undergo.