The inspector general (IG) of the Department of Veterans Affairs sent a letter to Iowa Senator Chuck Grassley notifying him that the circumstances surrounding the suicide of United States Marine Corp veteran, Sergeant Brandon Ketchum, are now officially under review.   Senator Grassley and his fellow Iowan Congressional members demanded the Veterans Administration provide answers as to why Brandon Ketchum, 33, was turned away from the facility despite having a history of drug abuse and crippling PTSD.  Ketchum would kill himself only hours after being turned away by the Iowa City VA Medical Center on July 7th.

The Department of Veterans Affairs Inspector General, Michael Missal, sent the letter and assured the senator that the department will

“[M]ake every effort to share whatever information we can in accordance with applicable law.” 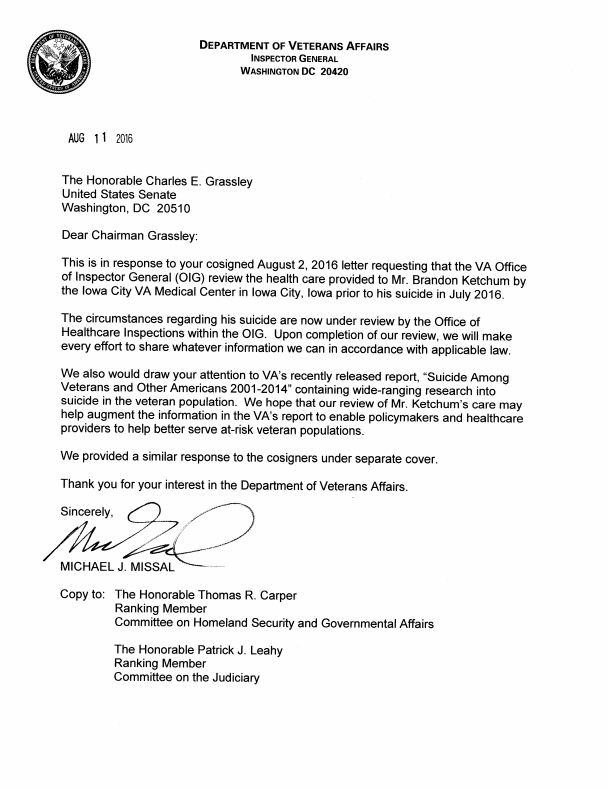 A copy of the letter sent to Grassley.

“This is a good example of why we have independent watchdogs at federal agencies.  Inspectors general review agency work and point out problems that need to be fixed or confirm that policies and procedures are fine as is.  In a tragic situation like a veteran’s suicide, an independent review is especially important so the VA and Congress will be better informed to give veterans the care they need and deserve.”

This young Marine’s suicide comes just as the Veterans Administration is being chastised for spending millions of dollars on art while the neglect of veterans continues to grow.  Will the inspector general’s official review help or hinder the already faltering Veterans Administration with regards to veterans who may be suicidal?  Sound off in the comments below.