The Syrian civil war is a long-running military affair that has created a serious military and humanitarian crisis in the region. Syrian military forces have been using unconventional tools against rebels and other Islamist forces who want to oust President Bashar Al-Assad from power.

Known as “barrels of death” by the locals, these barrel bombs are makeshift explosives packed with shrapnel and a weapon of choice for Syrian forces. They’ve been deploying these weapons from helicopters since 2012, but more heavily since 2014.

A “barrel bomb” is an old oil barrel packed with explosives, shrapnel and some kind of incendiary device set to detonate on impact and explode, taking down whatever is in their path. Barrel bombs have become a weapon of choice because of their great effectiveness, devastating effect, and low cost and reliability. They resemble birds in the sky preparing to drop their “eggs” and are a terrifying sight to the rebel forces. 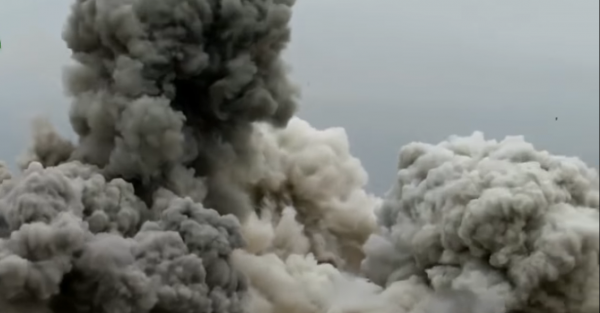 Not knowing when the next “barrel of death” will fall, and not able to escape or stop these weapons, the rebels have limited possibilities for moving forward.

In the video, you can hear the panic, the explosions, the terror, and the running. And while most will not be able to translate what these people are saying; it is certain from the pandemonium that it isn’t good.

The people repeatedly shout, “Allahu Akbar,” meaning ‘God is most great” or similar praise, so they are praying for their lives.

One bomb drops after another as the town is filled with smoke from the aftermath of each explosion.

These barrel bombs aren’t the first generation of its kind. Earlier versions of the barrel bombs included a wick that was lit before dropping it from the helicopter. After some revision, they built an impact trigger mechanism to replace the wick, and tailfins to improve their precision and reliability.

The barrel is typically three feet wide by six feet tall and can bear up to 2,000 pounds of explosives.

The bombs were supposedly dropped on terrorist compounds, but nevertheless has created additional devastation to civilians.

Syria has been criticized by the U.S., its allies, and human rights activists for their use of the barrel bombs.

Al-Assad has denied using such weapons, and insisting that Syrian forces target “terrorists in order to protect civilians,” according to BBC.

However, Assad’s actions have been perceived as intimidating to civilians as he maintains a tight grip on his power, unwilling to let politics or anything else interfere with his rule.