The Equal Employment Opportunity Commission (EEOC) has determined in a preliminary ruling that wearing clothing featuring the Gadsden Flag constitutes legally actionable racial harassment in the workplace. In short, wearing the Gadsden flag while at work can earn you the title of “racist”, earn you harassment charges, and cost you your job. The ideological witch hunt started back in 2014 when a black employee at a privately owned company filed a complaint with the EEOC when he saw a co-worker wearing a hat featuring the Gadsden flag and the words “Don’t tread on me.” The EEOC has decided to side with the over-sensitive employee, despite already admitting that the flag originated in a non-racial context and has been adopted by multiple non-racial political groups, countless companies and more, since it was created. 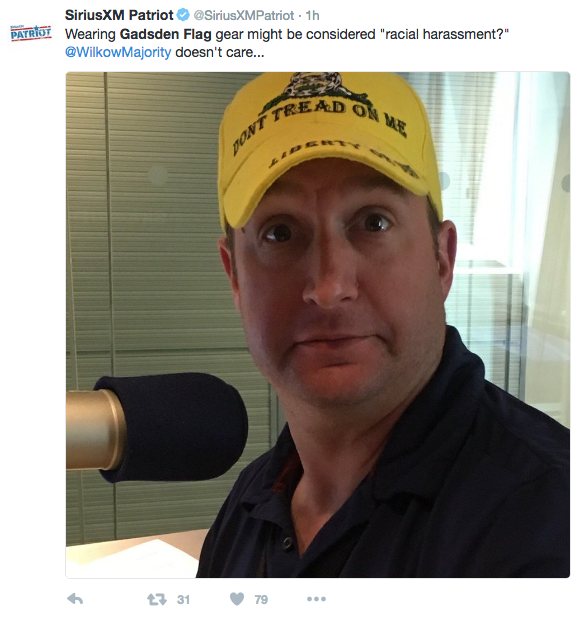 The black employee first complained about the anti-tyranny image in back in 2014. His immediate supervisor allegedly asked the “offending” employee to stifle his patriotism and remove the hat. After several failed attempts to shame the proud American the easily offended employee escalated his complaints to the EEOC. Eugene Volokh, a UCLA law professor who runs the “Volokh Conspiracy” blog at The Washington Post, reported that the EEOC stated they would need to “gather more evidence on the case” approximately two months ago. Since that time the EEOC has decided that the Gadsden flag is “racially insensitive.”

The investigation has revealed that the “racist” employee in question never uttered a word of even remotely racist speech to the offended employee. The EEOC has also admitted that there is no racist history of the flag. They conceded in a statement made to the Washington Post:

“It is clear that the Gadsden Flag originated in the Revolutionary War in a non-racial context, Moreover, it is clear that the flag and its slogan have been used to express various non-racial sentiments, such as when it is used in the modern Tea Party political movement, guns rights activism, patriotic displays and by the military.”

The employee that issued the complaint claims that the flag is racist because the person that designed the flag Christoper Gadsden was a “a slave trader & owner of slaves.” According to this logic the Gadsden flag is inherently as racist as swivel chairs, bifocals, and many other items designed by slave owning inventors. 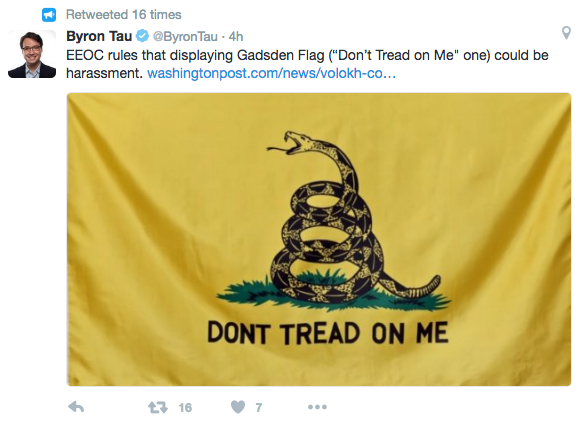 The ruling has not yet been made official. Investigations are ongoing but the EEOC seems to be moving towards finalizing the ruling on the basis that racism is “in the eye of the beholder.” An open statement released by the EEOC stated:

“whatever the historic origins and meaning of the symbol, it also has since been sometimes interpreted to convey racially-tinged messages in some contexts.”

The recent events they are referring to include two Las Vegas police officers being murdered by white supremacists who then laid the flag over their bodies and firefighters in New Haven, Connecticut claiming displaying the flag at their local firehouse constituted “racial insensitivity.”