The Federal Bureau of Investigation confirmed Tuesday that it has turned over a number of documents pertaining to the Clinton email probe, including notes from the FBI conducted interview, to Congress.  Though FBI director James Comey said the investigation concluded Clinton was ‘careless’, the bureau did not suggest the Department of Justice should take criminal action against her.

The FBI has specified that it has provided the congressional committees with all the “relevant” materials to the investigation.  The bureau also doubled down on its decision, reassuring congress that they continue to believe it is correct for the DoJ not to criminally charge Clinton based on their findings.

Acting Assistant Director of the Office of Congressional Affairs, Jason V. Herring, included a letter attached to the turned over documents in which he wrote to members of the Committee on Oversight and Government Reform to address the concerns the committee had with the FBIs conclusion.

“The FBI conducted this investigation, as it does all investigations, in a competent, honest and independent way,” Herring said.

“As the director stated, the FBI did find evidence that Secretary Clinton and her colleagues were extremely careless in their handling of certain, very sensitive, highly classified information,” Herring continued. “The term ‘extremely careless’ was intended to be a common sense way of describing the actions of Secretary Clinton and her colleagues. The director did not equate ‘extreme carelessness’ with the legal standard of ‘gross negligence’ that is required by the statute. In this case, the FBI assessed that the facts did not support a recommendation to prosecute her or others within the scope of the investigation for gross negligence.”

Herring signed off on the letter after mimicking the rhetoric that was first said by Comey in July, repeating that while Clinton was seemingly in the wrong yet evaded criminal action, others in her position would likely not be so lucky.

“However, as the Director has explained,” Herring wrote, “this is not to say that someone else who engaged in this type of conduct would face no consequences for handling classified information in a similar manner if they were still a government employee.”

Though lawmakers now have their hands on the information, it is unclear how much of that information, if any, can be shared with the public.

The materials, which are said to be heavily redacted, contain classified information.   The fact that House Republicans critical of Clintons actions cannot share the findings with private citizens frustrates some, but also reaffirms suspicions that the type of information being shared was too sensitive to be sent on Clintons private and unsecured server. 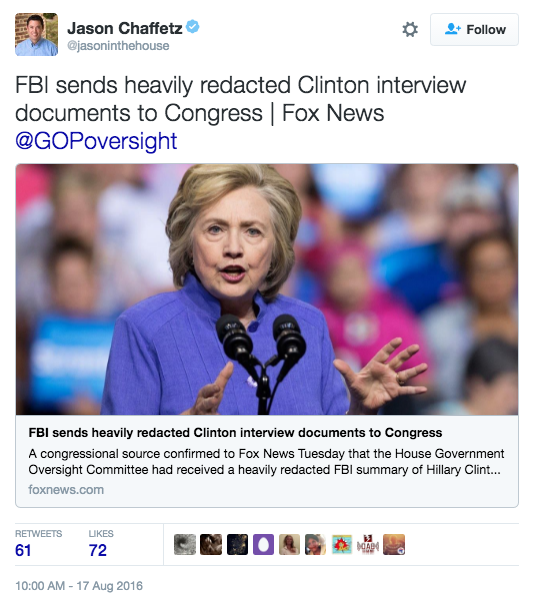 “Hillary Clinton is calling on this all to be publicly released, but she knows that can never happen,” Rep. Jason Chaffetz, Republican from Utah and Chairman of the Committee on Oversight and Government Reform, said.

Democrats such as Maryland Congressman Elijah Cummings, however, see Congress’ investigation into the investigation a desperate attempt to take down Hillary Clinton and gain traction for Donald Trump in the Presidential election.

“Republicans are now investigating the investigator in a desperate attempt to resuscitate this issue, keep it in the headlines, and distract from Donald Trump’s sagging poll numbers,” Rep. Cummings said.

Lawmakers who gained access to the documents were made to read them in a private room and were instructed not to share the contents of the materials with anyone who does not have authorization.