European Commission President Jean-Claude Juncker has come out and stated that he thinks national borders are “the worst invention ever.”  Juncker is speaking up after the latest attempts by countries within the EU to follow Britains lead and exit the union.

The European Forum Alpbach said on their website that they were the ones Juncker made the comment to.  The website claimed that he told the audience, “borders are the worst invention ever made by politicians,” and that solidarity must be given to migrants and their families.

The EU Presidents comments come as individual nations within the Union have been seeking sovereignty and feel the need for tighter border security in response to the migrant crisis in that region.

The statement continued, “The British people think that borders are important, having more control over our borders is important, and that is an issue we need to address.”

According to the European Forum Alpbachs website Juncker also said Brexit wasn’t a pretty moment for the EU and it was something that had to be overcome stating that, “in the concentration of globalisation and European problems, we must not lose our way.”

“We have to fight against nationalism, we have the duty not to follow populists but to block the avenue of populists” Juncker said. 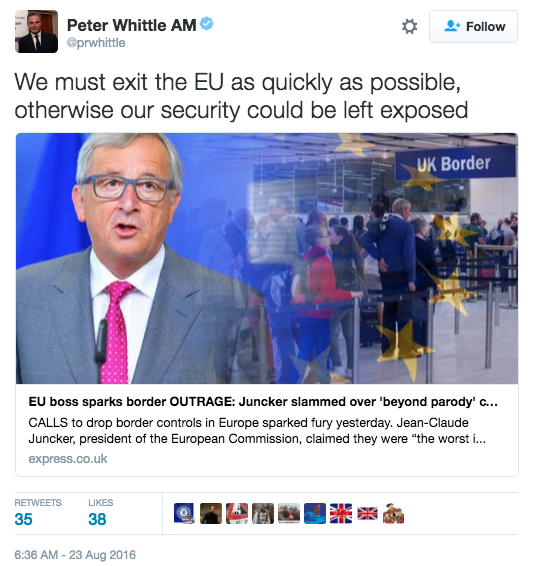 United Kingdom Independent Party spokesman Peter Whittle has also spoken up against Juncker, saying that his remarks are “beyond parody”.

“Safe and secure borders help to define a nation, you only have to look at Germany to see what happens when you when you effectively discard them,” Whittle said.  “Mr Juncker is also well behind the curve to think he, or his colleagues amongst the European political elite, can stop popular democracy from flourishing across Europe following the historic Brexit vote.”
“I’m happy to predict that Britain will not be the only country to leave the EU and become a free and sovereign nation again,” Whittle continued.

Juncker also made a point to attack Austrians who have spoken out against the European Union and it’s ever-growing problems.  He said that they were “Landesobermuftis” which translates to “Land of Upper Mufti” as an attempt to insult the region.

Critics have repeatedly called for Juncker to step down from his position from EU President after the Greek debt crisis and the failures that have come following his support to create open borders for Syrian refugees.