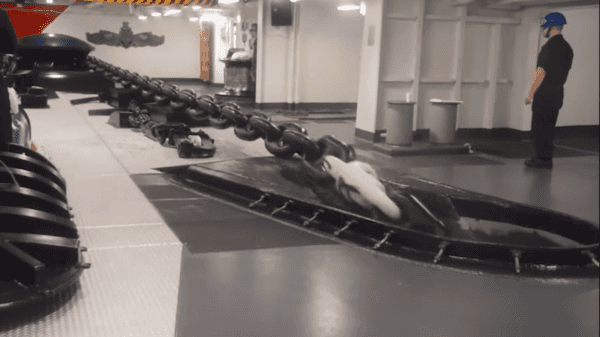 A number of sailors can be seen in the video working in the forecastle anchor room making sure that the anchor is properly dropped.

As can be seen, the chains in the anchor are extremely thick and heavy and have to be lowered carefully as to not harm any of the sailors on board.

At one point in the video, the anchor begins to be dropped at a rapid pace, causing sparks to fly up in the air due to the friction caused by the chains. As soon as the sparks hit the air, the dropping of the anchor is slowed down and stopped.

The Reagan is a Nimitz-class nuclear-powered supercarrier in the service of the United States Navy. She is the ninth ship of her class and was the first ship to be named for a then-still living former president.

Nimitz-class supercarriers have participated in multiple conflicts all over the world, including during the Gulf War, Iraq and Afghanistan.

The contract to build the USS Ronald Reagan was given to Northrop Grumman Newport News Shipbuilding and Dry Dock Company in Newport News, Virginia in Dec. 1984.

The aircraft carrier was christened by Ronald Reagan’s wife, Nancy, in March, 2001 at Newport News Shipbuilding. The USS Ronald Reagan was commissioned on July 12, 2003 at Naval Station Norfolk, with Captain J. W. Goodwin placed in command.  The ship made its maiden voyage nine days later.

Former President Reagan was not able to attend the commissioning or the launch because of Alzheimer’s disease. Eleven months later, Reagan died. 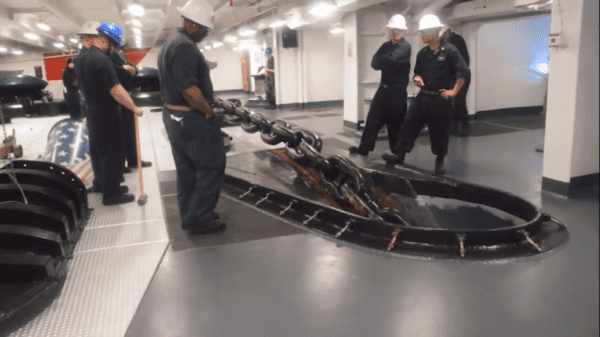 On Jan. 4, 2006, the USS Ronald Reagan made its maiden deployment to conduct naval operations in support of Operation Iraqi Freedom and Operation Enduring Freedom as well as take part in maritime security in the Persian Gulf.

More recently, the USS Ronald Reagan deployed near North Korea as tensions between the United States and North Korea have risen. In late August and early Sept. 2017, North Korea launched a missile over Japan and conducted a nuclear test just days later.

Check out the video to watch the anchor drop in the forecastle anchor room:

Massive flight formation of the largest US helicopter and VTOL: V-22 Osprey and CH-53

Amazing: Listen To The Vote For The Declaration Of Independence If It Had Been On Live Radio