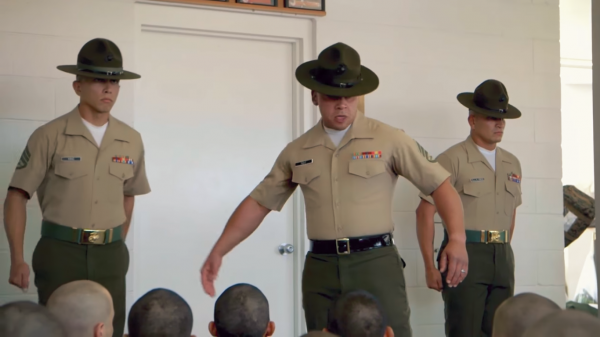 May spoke to the new recruits about what his and the other drill instructors responsibilities will be as well as what he expects of them during the 13 weeks of recruit training.

May conducts the speech in the exact way one would picture a speech being made by a senior drill instructor. 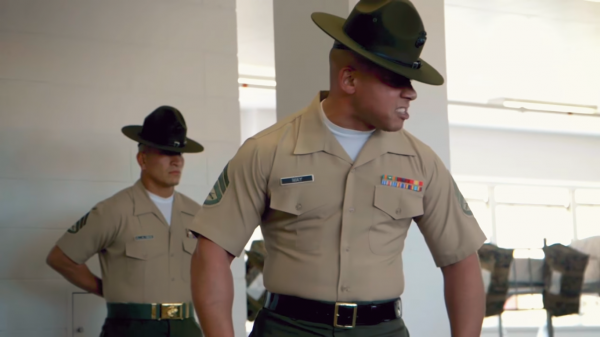 Being referred to as ‘Drill Sergeants’ may be taken offensively by U.S. Marine Corps Drill Instructors, since it is a term strictly used in the American military, just as Marines may be offended at being called “soldiers”. Doing this intentionally is considered a grievous insult.

Marine boot camp is a rite of passage for the new recruits, and drill instructors are usually feared by all. The main job of a drill instructor is not only to make recruits combat-ready but to instill values and discipline in them. Drill instructors say that recruits come from all walks of life, and many of them have no standards, discipline, or values. They must be prepared in those 13 weeks.

In order to be a drill instructor in the Marine Corps, candidates must have served a minimum of one full four-year enlistment in the Marine Corps. They must also hold the rank of sergeant or higher, and be able to pass the required physical fitness tests and medical examinations. Besides this, they must be recommended by their superiors.

Drill instructors are trained at Drill Instructor School for 12 weeks during which they learn to train recruits on subjects like military history, physical fitness, drill marching, swim qualification, and leadership training.