The line between video games and reality have been blurred. This soldier on deployment in the Middle East pulls of a Call of Duty-esque move by wielding powerful M249 machine guns — two of them at once.

The M249 Squad Automatic Weapon, also known as SAW, is a portable, gas operated light machine gun with a fixed head space and a quick-change barrel feature, and the capability to engage point targets out to 800 meters with a 5.56mm cartridge. Shooters can choose from 30-round M16 magazines or clipped ammunition from pre-loaded 200-round plastic magazines. 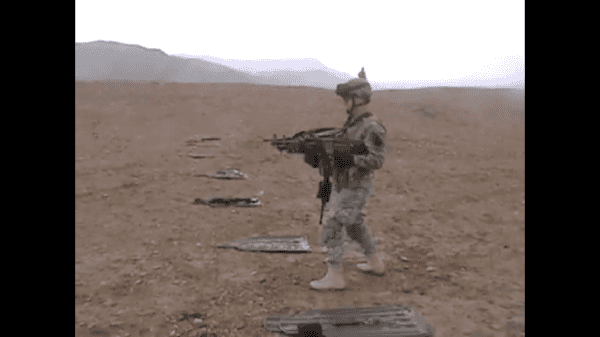 The M249 is manufactured by Fabrique Nationale of Herstal, Belgium. It weighs 18 pounds, is nearly 41 inches in length, and has a barrel length of 18 inches, according to Military.com.

Shooting one is not an easy task — let alone two at once.

While this soldier may not have had the best accuracy, it is impressive to watch him hold both weapons level and endure recoil that would shake an ordinary civilian to the core.

Take a look at the video below (but don’t try it at home!):

The M249 basically replaced the old M60 machine gun that was used until the Minimi came out. The Minimi had various pros and cons, it weighed less, it was faster firing and also shorter, but it wasn’t exactly what the military was looking for.

When the M249 was introduced, it had all of the firing power and didn’t require two men to use the gun, like prior versions did. 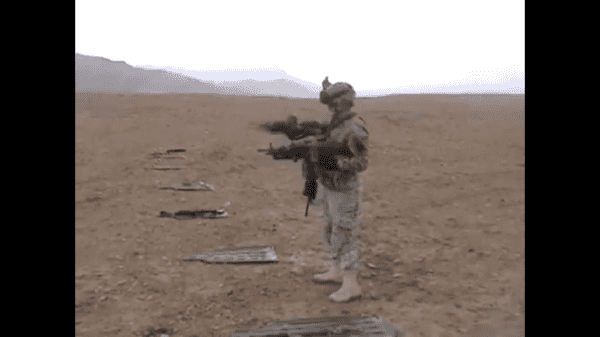 The first time the M249 was tested was in the 1991 Gulf War, then in 1992 in Somalia, and then following 9/11 they were used by the U.S. Army’s Green Berets, 10th Mountain Division, 101st Airborne Division, and U.S. Marines. They were key weapons in the Iraq War and still used in Iraq and Syria in the fight against ISIS, according to the National Interest.

The M249 has advanced in many ways since. They now come with Trijicon Advanced Combat Optical Gunsight (ACOG) and Elcan Spectre optics. The “Paratrooper” variant weighs about 16 lbs and has an overall length of less than three feet. Another variant used by special forces weighs even less and has a longer barrel for more range and accuracy.