YouTube user Steve1989MREInfo is no stranger to all sorts of meals-ready-to-eat (MREs). Foreign, domestic, old, or new makes no difference in his eagerness to dig into one of these.

The food in this video comes from a Canadian Emergency Survival MRE that is more than 70 years old and has a reputation for being one of the worst tasting rations eaten by Canadian troops.

These rations are encased in a can similar to the kind that Spam used to come in, with the metal key on top to roll off the metal top. It clearly is labeled as a product from 1945 and it doesn’t look appetizing. 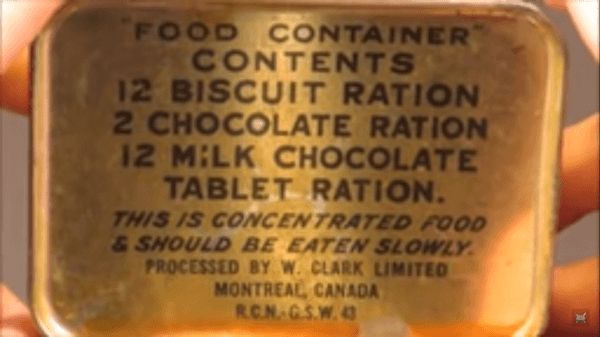 It’s a 1945 World War II food ration container that holds 12 biscuits, two chocolate rations, 12 milk chocolate tablets, with a warning label that says to consume the food slowly as it is concentrated.

The Canadian soldiers didn’t remember much about their rations when returning home from war but the one thing they did recall very well was this particular ration that was notorious for being so horrible.

With the ration can open, Steve described the smell of it as sweetly rancid, then the ration biscuits and the first bite as disgusting. Can you expect anything different from 71-year-old biscuits with nothing to drink?

Check out this video to see what could be among the world’s oldest chocolate being eaten.

Steve sympathized with the troops who had to endure these nasty rations because their lives depended on it.

He moved on to the discolored, crusty-looking chocolate. After taking a bite, he appeared confused about the verdict but quickly agreed it is one of the worst things he has ever eaten, but determined that chocolate shouldn’t be wasted.

Steve then moved on to the milk chocolate concentrated tablets that resemble something fed to rabbit or fish. They are hard and crunchy tablets, and Steve described them as the worst of all. He said it tasted like a blend of dirt and cocoa mix.

He quickly retrieved bottled water to help him swallow down the dry, unpalatable mess. “That’s the best water I’ve ever had in my life,” he joked. 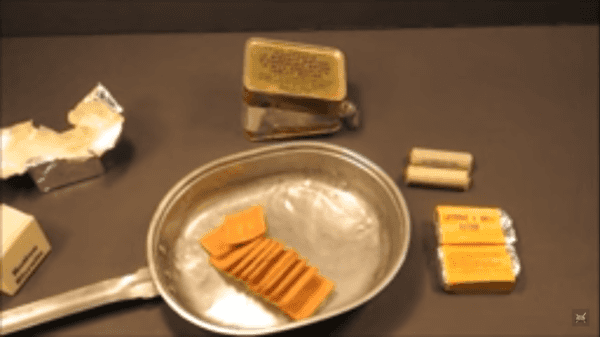 Steve said if the troops had to eat them then we should have to as well. Despite their unpleasant taste, he couldn’t stop himself from eating them. “Definitely does taste good when you’re hungry,” he added toward the end of the video, before declaring he’d succumbed to enough torture from the meal.

Soldiers Show Us That Tanks Can Fly In Sweet HD Video