An Army paratrooper ends up stuck in a tree after getting blown off course during a training exercise. ( Talon St. Clair/YouTube)
May 24, 2016 Wade Bennett
Share
Tweet
Flip

Cadets in training attempt to prepare for every situation they might face in a real-world situation. Sometimes, a training exercise can turn into a dangerous situation of its own.

During a practice jump, a U.S. Army paratrooper ended up off course during the landing, and he found himself having to put all his basic training skills to use in order to safely free himself. The entire ordeal was caught on camera and uploaded to YouTube. 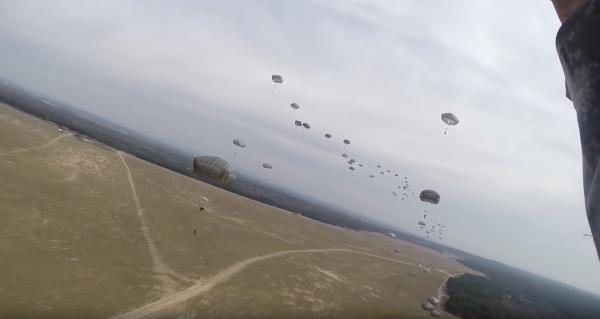 In the video, the trainee can be seen jumping out of a plane during an exercise that included a large number of other paratroopers. The jump was conducted over a vast field, but the soldier quickly realized that he was inadvertently headed off course.

Moments later, the cadet is suspended in the air and dangling from his tangled parachute.

Fortunately, the unlucky landing did not result in any injuries to the solider. The man also makes light of the situation with a candid comment about his precarious predicament.

“As you can see, I’m definitely in a tree,” he remarks, pointing the camera towards the ground and showing his legs 20 to 30 feet off the ground. 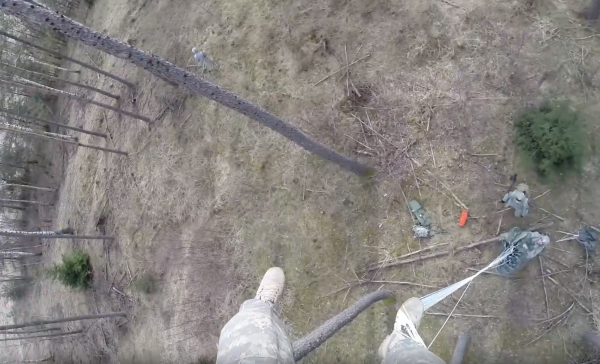 A number of other soldiers come to his aid as the man begins the process of unloading his gear and figuring out the best method of getting back on solid ground.

In order to free himself, the paratrooper decides that the best course of action would be to open up his reserve shoot and extend it towards the ground. After unhooking himself from the main chute, he then uses the second chute as a makeshift rope and shimmies down from the tree with ease. 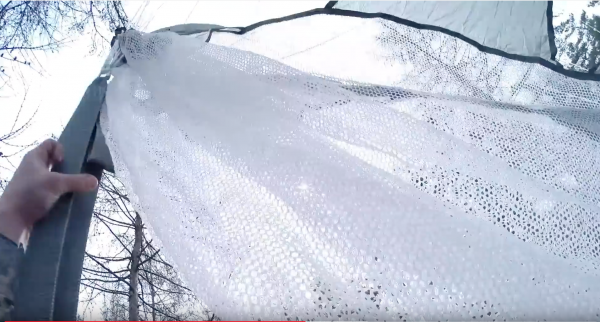 “Awesome dude. We’re good,” he says to the soldiers on the ground after having successfully made his way out of the tree. He was met with praise and a check to see whether his hands were injured in the unconventional climb.

The paratrooper was fortunate to have made it out of the ordeal safely, and now has another invaluable learning experience he hopefully won’t need again.