VIDEO: US Special Forces engage in intense firefight with minigun in Afghanistan

Frightening video featuring a group of United States Special Forces soldiers engaged in a firefight in Afghanistan offers a glimpse of combat not often seen by civilians. The clip, part of an upcoming documentary on the war in the Middle East, shows the sights and sounds of an active combat situation from the driver’s seat of a Humvee.

The situation was captured on video from a helmet-mounted GoPro and offers a first-person perspective of the dangerous engagement.

The heart-pounding video appears to show at least three men inside the armored military vehicle actively engaged with enemy combatants. The soldiers quickly communicate with one another in order to zero in on the threat, and the intensity of the situation can be heard in their voices.

The men seem to be communicating not just with one another, but also with other nearby soldiers who are engaging the target.

Check out the video in its entirety below:

One of the men in the video stands atop the vehicle controlling a mounted minigun. At a few of different points in the video, the deadly weapon can be heard firing off dozens of bullets a second. Standard M134 miniguns have a sustained rate of fire of between 2,000 and 6,000 rounds per minute.

“Get it again!” the driver shouts as the soldier fires off more rounds.

The driver also attempts to maneuver the vehicle in position in order to get a better vantage point for the gunner. 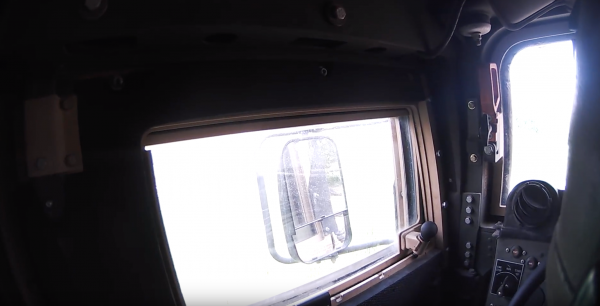 A number of other firearms can be heard throughout the clip, though it is unclear whether they are from the U.S. Special Forces or the combatants.

Also riding along in the vehicle is a military working dog. Canines have been a part of every branch of the military for decades, and usually serve as scouts, sentries and trackers. The working dogs do see combat from time to time, though they are regarded as a non-lethal option for engaging a target.

Today, there are about 2,500 dogs in active service with around 700 deployed in various locations overseas. Military dogs are usually German Shepherds, Belgian Malinois, or Labradors.

Video Of Drill Instructors Doing What They Do Best: Yelling And Conduct Inspections

See The U.S. Navy’s New $13 Billion Aircraft Carrier That Will Dominate The Seas