In May 2016 we published an article reporting on Sean Hannity’s exclusive report (archived) that Donald Trump personally sent his own plane to transport 200 stranded U.S. Marines. Hannity’s report claimed that this was confirmed to him by the Donald Trump Presidential campaign.

In Hannity’s report, which has been removed from his website, it also quoted a U.S. Marine who was on the flight, and the Marine provided a picture that he took of the plane with “TRUMP” painted down the side.

Hannity.com also said that the Trump campaign confirmed the event to them, stating that: “The Trump campaign has confirmed to Hannity.com that Mr. Trump did indeed send his plane to make two trips from North Carolina to Miami, Florida to transport over 200 Gulf War Marines back home. No further details were provided.”

Here is a tweet from Hannity that links to his report. 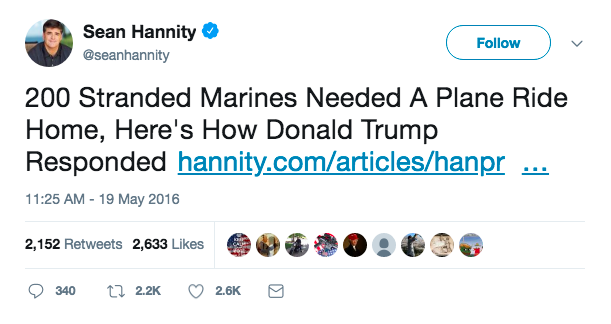 Hannity’s report was disputed by Snopes due to the fact that there is no proof that Trump “personally” sent his personal plane, and that the Trump airline “Trump Shuttle” was being run by another company at that time and the plane looked like a Trump Shuttle plane.

Buzzfeed and CNBC cited American Military News in reporting about questionable reporting, with CNBC saying that the “real story is slightly different.”

Due to the multiple corrections we issued and the general confusion around the story, we decided to remove the article entirely.