YouTube user JT Custom Knives decided to debut his self-built rifle — the 700 WTF — and shoot it for the first time while on video. The rifle is meant to be equivalent to the McMillan Tac-50 .50 BMG sniper rifle, which holds the record for the longest kill at more than 2,300 yards, according to Gizmodo.

His creation used .700 caliber bullets of 1132 grains. The round fired from this rifle can travel at speeds up to 1,800 feet per second and can obliterate anything in its path. They jokingly say when a Tyrannosaurs Rex charges through your neighborhood, this would seem to be the perfect tool for the job.

This “700 WTF” rifle can be compared to an upgraded elephant gun that will destroy anything, including your shoulder. Shooting the rifle without the muzzle break would generate 150 feet per pound of recoil on the shooter’s shoulder. 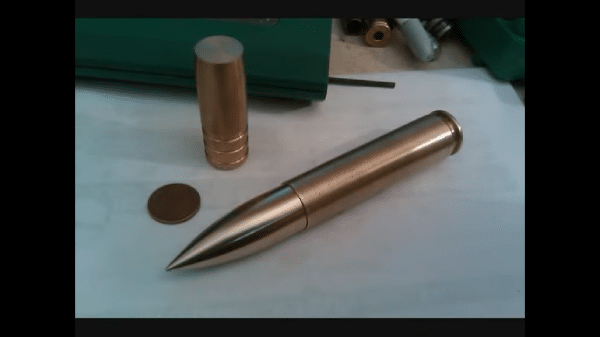 The bystanders said they could feel the blast from the rifle, and even urged the shooter to move away from the vehicles in case of the force shattering the windows. The video shows different shooters cycling through the sights for their turn at shooting this monster, and none seemed disappointed by the experience.

The final target was a combination of a one quarter inch steel plate in front of a dense, 1.5-2-foot log.

Check out this video of these guys shooting the rifle:

The bullet, which was not hardened lead or heat-treated, fired through the steel and penetrated the log. The bullet was simply straight air-cooled wheel weights, paper-patched, and traveled 1700-1800 feet per second.

The bullet was recovered after they split the log to recover it. It formed into a large mushroom top. When he weighed it, the scale read 999.4, so the bullet demonstrated strong weight retention, only losing 132 grains during the shot. 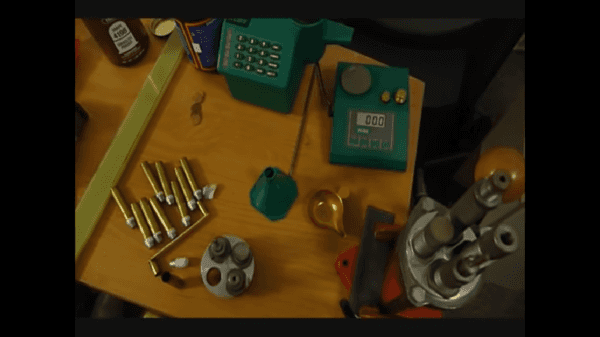 When they removed the bullet, they found a similarly shaped piece of steel in front of the bullet which indicated that a piece of the steel plate blew through and remained with the bullet into the log, forming its own steel jacket.

The steel plate had a massive hole right through it, which resembled a laser beam cut. It was a remarkably clean cut considering the thickness of the plate.

There was so much energy imparted in the plate that it left an impression in the log. The user mentioned that the bullet could easily blow through a half inch plate of steel, especially if he heat-treated the bullets.