Watch the U.S. Navy Parachute team, also known as the Leap Frogs, parachute jump into Neyland Stadium, the home of the Tennessee Volunteer’s football team, during a spring scrimmage football game. This act is part of Knoxville Navy Week.

The Leap Frogs are a parachute demonstration team for the United States Navy Parachute Team. They are made up of active personnel volunteers drawn from groups such as the Navy SEALs, Special Warfare Combatant-Craft Crewmen, and other support personnel. They have shows all across the United States.

The website of the Navy Seal Museum describes Freefall Parachuting, also known as Sky Diving, as “the art of exiting from an aircraft at a high altitude, stabilizing the body during a delayed fall, executing various maneuvers, safely opening the parachute at a given time over a given ground reference point and guiding the parachute so as to land on a specific target.”

Truly, today’s Freefall Parachuting is a lot more advanced than what it was sixty years ago, thanks to technology, training, and expertise. Not even the pioneers of the UDT Seals could have imagined the height this art form has reached today. It must be agreed that no one does it better than the Leap Frogs.

The U.S. Navy’s Sea, Air, and Land Forces, commonly known as the Navy SEALs, are the U.S. Navy’s primary special operations force and a part of the Naval Special Warfare Command. The Seals are specially trained in intense and challenging warfare skills that go beyond the capabilities of standard military forces.

The first few seconds of the video, where the Leap Frogs are freefalling from the aircraft, are a little creepy, but the craziest part is when they chute down to the stadium in a little over three minutes.  The Leap Frogs prepare for their landing and in the blink of an eye, they are in the middle of the stadium with tens of thousands of people cheering them on.

Viewers wonder, how the Leap Frogs get so close to each other without having their parachutes all tangled up. The people performing these stunts are indeed fearless live for these drops. For them, a little skydiving is child’s play. 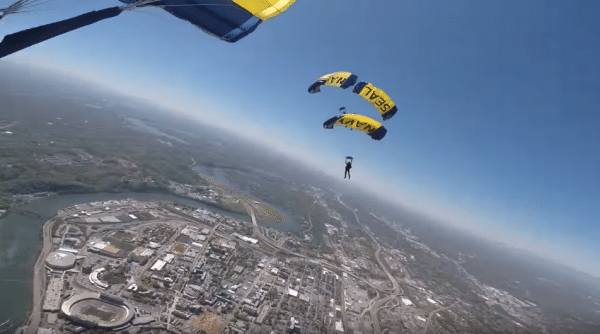 The show was to mark Navy Week in Knoxville. Navy Week is when members of the U.S. Navy visit different parts of the country and meet citizens as a way of saying thank you for their support.

Can 8 iPhones Withstand The Power Of An AK-74? Let's Find Out!