If you are getting ready for a zombie apocalypse, this weapon is a necessity. It has everything needed to fight a zombie hoard at close range.

YouTuber Matt Carriker of Demolition Ranch is about to review a Ruger LCP .380 pocket pistol with a laser until a brief stunt during which he’s chased by Creepy Cooter, his gay mannequin friend.

After a brief but wild chase, he comes upon Cooter’s larger, more interesting gun that appears to be just the kind of weapon to ward off zombies.

“Every serious zombie apocalypse prepper needs one of these ASAP!!!” he wrote in the video caption. 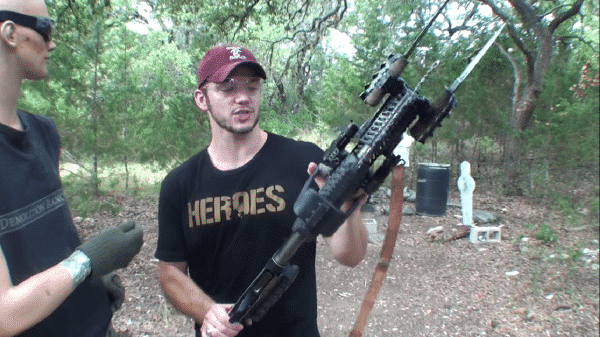 Cooter says the weapon is custom built and Carriker wants to check it out a little closer. He confirms there are two flashlights on the top, two bayonets on the front, and a chainsaw blade — although non-functioning and included just for cool appearance factor. Cooter agrees to let Matt see the weapon and set their differences aside.

The targets appear to also include a couple of cinder-blocks, a big barrel, a couple of metal targets, including the mannequin bust “Lt. Dan,” and some other odd and random pieces. Two heads of lettuce also explode into pieces after incurring the wrath of the shells.

Next, a shot at a watermelon. After a couple failed attempts, the watermelon becomes nothing more than flying flesh and juice. Carriker even catches flying melons on the bayonet and blasts them to a pulp.

Shooting the mannequin at point blank range with a slug leaves a dramatic open wound, giving a glimpse into the devastation that could be brought to a zombie’s torso. All it’s missing is a tactical belt full of buckshot and slugs. 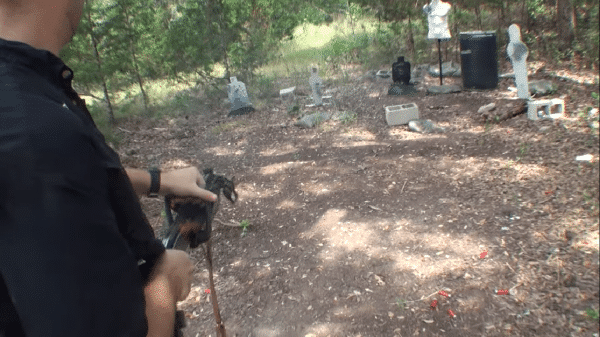 Carriker concludes the video by giving a shout out to John Wright who designed the gnarly weapon.

Several YouTube comments remarked on how similar the gun is to guns in video games such as Gears of War or fictional universes like DOOM.

Like every Demolition Ranch video, Carriker gleefully demolishes targets with an interesting new weapon and left little to be disappointed about.