The Navy SEAL snipers are the best in the business. They are ruthless and deadly accurate even after a multi-day stakeout. How do they perform while putting an unfamiliar rifle through standard stress tests?

In this video, West Coast Navy SEAL Sniper Monty LeClair conducted a stress test course that mixed a range of shots to perfectly demonstrate the capabilities of an MK-12 SPR. 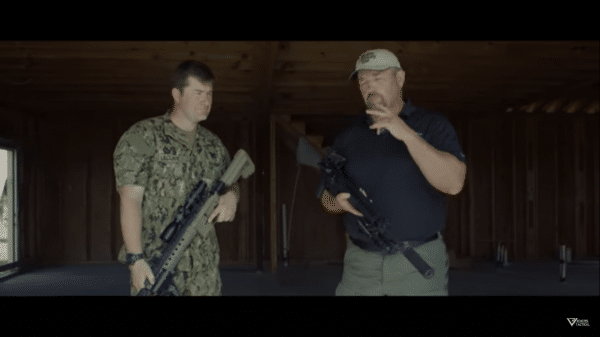 Larry Vickers of Vickers Tactical admitted that LeClair is much more experienced on the MK-12 SPR than he is, so he asked him to run the course of fire.

Real training must integrate stress training into the regiment. Vickers said, “It’s a lot harder to shoot when your heart is racing and you are breathing heavy, which is far more realistic than just bench shooting.”

Check out the test below:

There were two guns used in this video, both from Bravo Co.: the SAM R and the MK-12 SPR. LeClair said he had never seen either of these guns in the Navy’s arsenal, and as far as he knew, only the Army uses them.

LeClair showed the exact positions and favorable outcomes from this particular stress test. He started at the bottom of the steps and worked his way up, then engaged three targets from the top window. There were multiple targets at different ranges. Then he would move to an area with a camera tripod set up with one target as close as 50 yards to require quick transitioning from target to target.

Then he would change directions to replicate an urban environment and go to the doorway, engage the target, move to the window and take a shot at another target. Finally, he would transition outside and force himself to shoot in an awkward position because real life combat isn’t full of the easy shots. 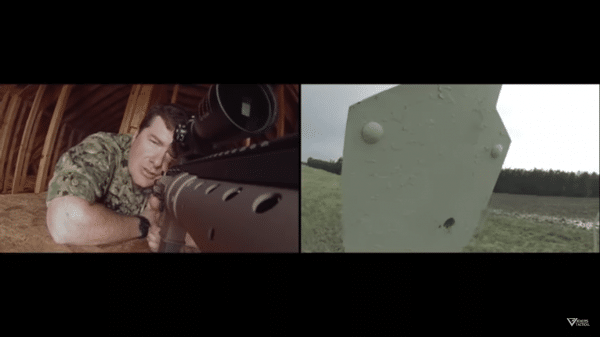 In fact, forcing soldiers to shoot in the most uncomfortable situations is the best way to add the stress necessary for when that real-life situation approaches.

LeClair rushed the steps and eyed up his first target. He took two shots, and both hit the chest of the target. He raced down the stairs to the tripod and followed up. Spot on! At the door, he blasted the target with one bullet and moved on.

Once outside, he raced across the area to some brush and fell to his stomach for his next shot. He fired and completed the stress test.

He nailed each target, showing how vital training is to an active situation.