The unmistakable love and loyalty of dogs was on display when 21-year-old Army private Hannah Foraker returned from after three months of Basic Combat Training & AIT for Christmas break in 2015.

Foraker had left in Ohio on Sept. 9, 2015 to start basic training at Fort Sill, Okla. and came home for a short break before leaving for her duty station, ABC News reported at the time. Upon her return, her elderly and deaf dog Buddy lit up with joy when they reunited. 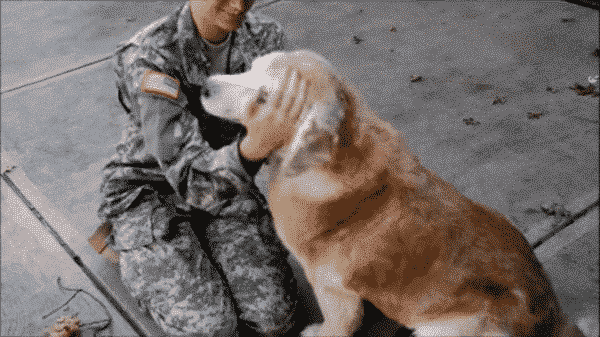 In the video, Buddy doesn’t really quite know how to act when she sees her owner, but it seems clear that she remembers Foraker and is extremely happy to see her again. Dogs typically know who their “person” is and in this case, Foraker tops the list for Buddy.

“When I came home we let her outside and, at first, she didn’t realize I was home,” Foraker told ABC News. “Then, she did a double-take and came back to me. That’s when she started crying and whimpering. She was so excited.”

Check out their reunion in the video below:

Buddy, who was 13 years old at the time, suffered from hearing loss and arthritis.

The video, posted from Foraker’s YouTube account, went viral and amassed more than 6.7 million views. It also generated a spot on the Today Show. 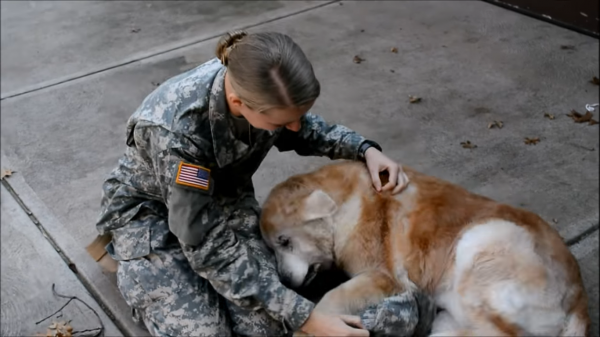 Foraker told the Today Show, “I have never been away from home before, so this was a huge deal for me.” Hannah said it was definitely hard to say goodbye to Buddy, who she had since childhood.

Foraker said, “It pulled at my heartstrings, to say goodbye, though having never actually left home before I didn’t realize the importance of giving proper goodbyes.” Hannah added, “Buddy was so overwhelmed that she just collapsed in pure happiness. We were apart for [more than three] months, so the reunion was such a beautiful experience.”

The reunion was extra special for Foraker, who said she worried every time she left Buddy that it would be the last time they’d see one another.  The reunion rejuvenated them both.

The pair typically use Skype to communicate when they’re apart. “Even though she doesn’t realize what’s going on, she feeds off the energetic excitement of the room and my voice through the speaker. It’s always so sweet when she starts licking the laptop!” Foraker said.

At the time, Foraker did not expect to return home again until the next holiday break.