The Los Angeles class is a class of nuclear-powered fast attack submarines in service with the United States Navy. They represent two generations and close to half a century of the U.S. Navy’s attack submarine fleet. This type of submarine can hold a crew of 140.

Los Angeles-class submarine USS Hartford (SSN-768) is part of this family of submarines. Famous for having successfully launched and recovered an AN/BLQ-11 unmanned underwater vehicle (UUV) in October 2007, the first such operation from a submarine. The USS Hartford, which left from Groton, Conn., can be seen in this video breaking through several feet of solid ice in order to surface in the Arctic Circle and when it does, it looks like the surrounding ice is breathing. 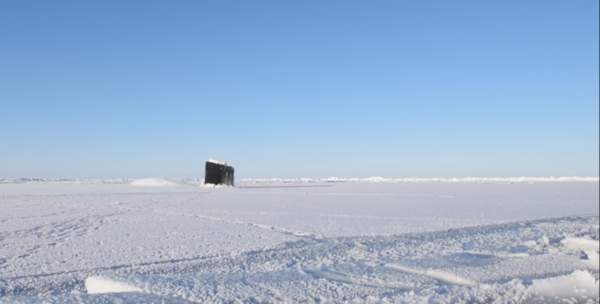 The submarine churns through the ice and when it surfaces, it truly is an epic scene. This video shows what happens during a five-week exercise called ICEX, with joined efforts of the U.S. Navy, Air Force and Army. The goal is to make sure the U.S. can breakthrough and maneuver in this region when it needs to, according to Popular Mechanics.

Commander Tommy Crosby, a Submarine Force Atlantic spokesman who watched the USS Hartford surface, said, “Temperatures inside the sub hover around a luxurious 65 to 70 degrees, in stark comparison to the brutal 30-below-zero temperatures outside,” according to Slate.

In the video, once the submarine has breaks through the ice, you can see a head appear from the top and attempt to shovel the mound of snow from the surface of the submarine.

In a region that is so cold and snow covered that it is pretty much uninhabitable, not many research or military exercises had been conducted in the Arctic in the past. Popular Mechanics credits global warming for the new moves. There is still a ton of snow and ice, but it is more manageable now. 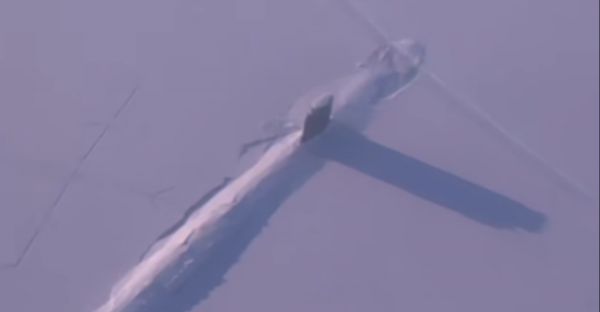 35 organizations made up the exercise including, the Naval Postgraduate School in Monterey, Calif., who sent three teams of researchers. “One of the three teams is examining how Arctic conditions affect underwater acoustics and sonar. Another is using unmanned aerial and underwater vehicles to test navigation tools when surface ice blocks GPS signals and prevents surfacing. And a third team is setting up monitors to track how temperatures fluctuate at different depths,” according to Slate.

Popular Mechanics explained, “Camp Sargo was established just north of the Arctic Circle floating on an ice sheet 200 miles north of Prudhoe Bay, Alaska, as a makeshift ice camp. But soon after it was strengthened when a C-17 airdropped a dozen Air Force and National Guard soldiers and a 9,500-pound arctic sustainment package.”