Out of the entire Marine Corps, only four men can call themselves West Wing Sentries.

The official name for West Wing Sentries is the White House Non-Commissioned Officers, and the United States Marine Corps have that exclusive responsibility.

From the time the President arrives at his office, to the time he leaves, these elite Marines stand guard outside the West Wing. 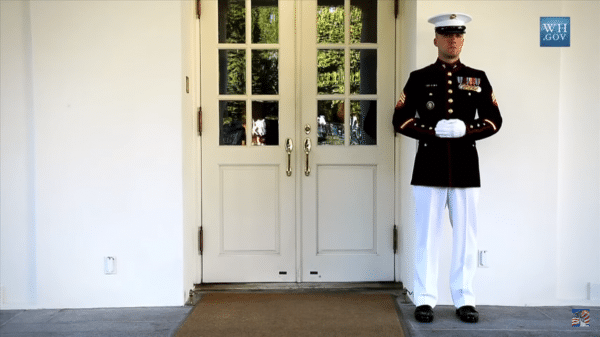 They operate in 30-minute shifts, opening doors and standing watch.

One might call them doormen for the President. But how do they know precisely when to open the door when someone is coming out? The Secret Service sounds a buzzer. Only one buzz sounds for anyone except the President himself. When the President is headed out, three buzzers sounds will be present.

One of their duties is to stand outside the Pennsylvania Avenue entrance to the West Wing and salute the President as he comes and goes.

The newest Sentry in the video said that he kind of felt like a VIP when he reported to his first post.

Check out this behind-the-scenes look:

They have no facial expressions and stand tall with their white-gloved hands clutched in front of them. No sneezing, itching, or even smiling is allowed. Composure must be maintained at all times, and the White House is always photographed — especially the West Wing door where photographers are constantly pointing their lenses.

It is crucial that the Sentries know when to and when not to react.

Marines do not volunteer to be White House Sentries, but are rather assigned. This isn’t a combat role, but it is one of pride and privilege. 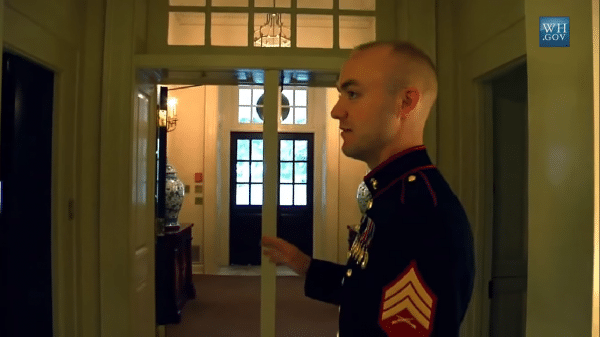 Before a Marine can be a West Wing Sentry, he must pass a Yankee White clearance, which is jargon for an extensive background check to ensure that all U.S. citizenship requirements are met, and that the individual has absolute loyalty to the U.S.

The West Wing Sentries began in 1970 under the direct order of President Richard Nixon to “add dignity to the White House,” according to IPFS.

Former Gerald Ford squashed the program and it was later reinstated by Ronald Reagan while he was president.

After 36 Years Of Service, This Iconic Fleet Of Choppers Make Their Final Flight