Watch: An MK-48 and an A-10 inflict their wrath on terrorists

Providing cover for a unit can come in many different forms. In some cases, the best way to keep the enemy at bay is with a non-stop onslaught of bullets aimed toward their post. And one gun, in particular, gets the job done: the MK-48 machine gun.

In a video posted to YouTube in 2012, viewers are treated to a first-person point of view of a soldier firing hundreds of rounds from his MK-48 through enemy lines as A-10 aircraft screams overhead to offer further assistance. 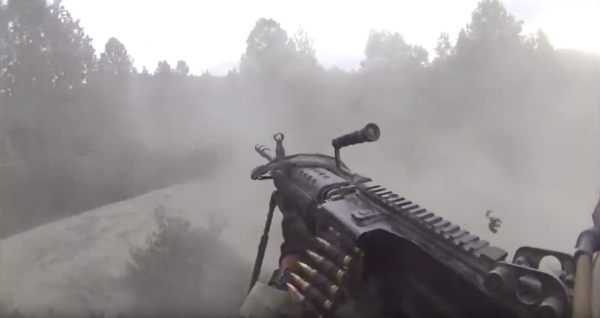 The MK-48 machine gun goes by a number of different names; the Mark 48 and the Maximi are just a few.

Capable of firing at an astonishing 710 rounds per minute, the MK-48 can effectively strike targets from 875 yards away. And with a maximum potential target reach of nearly 4,000 yards, the gun is certainly an all-purpose weapon.

Check it out in action in the video below:

Reloading such a behemoth of a gun is quite the task. In the video, the soldier can be seen feeding a belt of rounds into the gun and throwing the excess length around his neck to keep it organized. Even under heavy fire, the soldier in the video quickly and effectively reloads his weapon and jumps right back into action.

The soldier in the video was likely a gunner conducting a suppressive fire technique. Suppressive fire, or covering fire, threatens injury or casualty to anyone attempting to expose themselves. It forces the enemy to stay in place while air support or flanking units can launch their attacks from another direction. 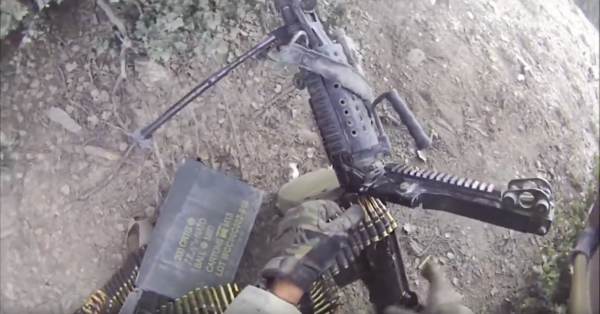 In the video, the intense confrontation includes A-10 fighter jets flying overhead. The aircraft used by the United States Air Force is nicknamed the “Warthog” or “Hog.” It was designed to be used for close air support and is capable of attacking armored vehicles.

A pair of Warthogs can be seen in the video making a number of passes over the area. 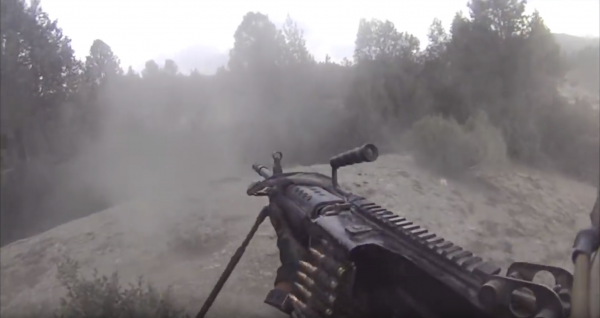 Very rarely are civilians given the chance to experience what it is like to be engaged in conflict, but the video above provides an intense look at a harrowing battle. With dust and smoke all around and shots seemingly being fired from every direction, the scene seems unimaginable for those who will never experience it.

But for the brave men and women serving around the world, this setting is all too familiar.