A Royal Air Force Harrier GR9 crashed as it attempted to land on a runway in Kandahar, Afghanistan following a routine mission in May 2009. The pilot of the aircraft can be seen ejecting from the cockpit in the moments after the impact, having stayed inside the burning jet as it slid down the runway.

While the aircraft was a total loss, the pilot escaped the incident with only minor injuries. 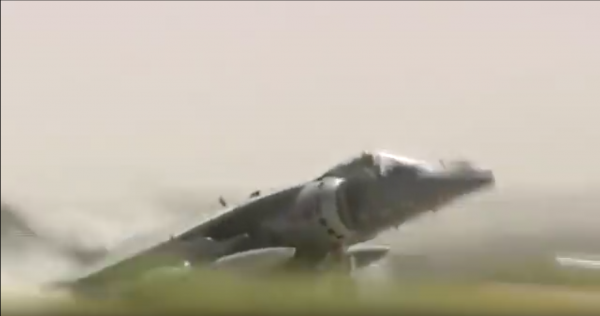 The pilot was a member of No. 1(F) Squadron in The U.K.’s Royal Air Force, according to details compiled by WikiBase. The harrier was part of a pair returning to base after an uneventful assignment in the region. Due to a busy runway, the pilots’ approach was delayed by more than 10 minutes. After finally being cleared, the first pilot requested an expedited landing to air traffic control, citing low fuel.

Upon landing, the first pilot received a hostile missile alert and released flares. In the ensuing confusion, the second pilot’s approach was 6,500 feet higher than required, and his landing would be too short. In an attempt to correct this, the pilot opted to perform a hover stop, a maneuver that might allow the aircraft a chance to slow down and fix its approach.

However, during the maneuver, the tail of the aircraft struck the ground and the aircraft began to slide across the runway.

Check out the video of the incident below:

In the video, the aircraft comes apart with the undercarriage collapsing and nose detaching. In a matter of seconds, the harrier bursts into flames as it slides some 4,000 feet along the pavement.

The pilot of the aircraft can still be seen inside the cockpit. The brave airman decided to stay with the jet as long as possible in order to attempt to steer the wreckage away from other aircraft stationed on the base. 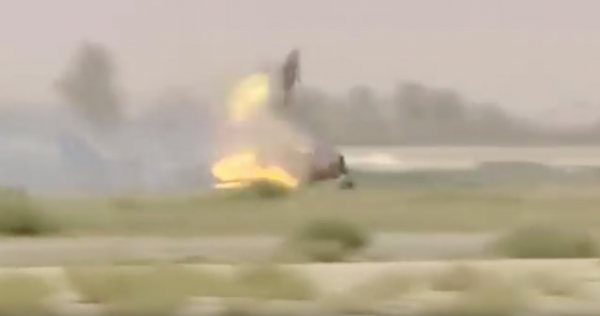 As the harrier becomes nearly entirely engulfed in flames, the pilot can be seen finally ejecting from the aircraft.

In a matter of seconds, he parachutes away from the still-burning wreckage that slides to a stop. 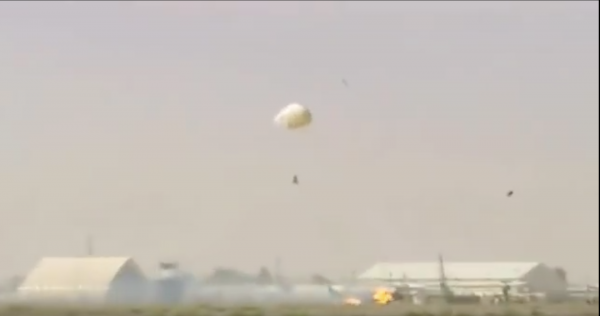 Not only did the pilot escape the ordeal with only minor injuries, but he was commended for his actions. It was later revealed that the pilot steered the burning jet away from four other aircraft waiting to take off on the runaway, preventing a catastrophic disaster.

A look at the fastest bomber ever created, the XB-70 Valkyrie