WATCH: The late Chris Kyle’s ’10 Questions’ interview on the harsh realities of killing

He was killed on Feb. 2, 2013 at the age of 38 by former Marine Eddie Ray Routh. Kyle and a friend took Routh to a Glen Rose, Texas shooting range to help him with his PTSD, but he turned the gun on Kyle and his friend, shooting and killing them both, ABC News reported.

In this video, America’s Sniper sits down with a Time magazine correspondent to explain the sniper’s point of view after revealing his autobiography, American Sniper: The Autobiography of the Most Lethal Sniper in U.S. Military History. The book was a bestseller and was on the New York Times bestseller list for 18 weeks, 13 of which were at number one, according to Warner Brothers.

When asked why he wrote the book when speaking out about special operations is frowned upon, Kyle said he wanted to shed light on the sacrifices of military family members, as well as stories of fallen brothers whose stories aren’t told because they didn’t earn a medal.

When asked about his record number of kills, Kyle explained that a witness has to see the shot and the subject fall for a kill to be recorded. Then, he explained, an assessment form must be filled out to explain everything from the caliber used, the distance of the shot, details of the subject’s clothing and positioning, and more.

“Somewhere there’s 160 of those forms with your name on them?” the interviewer asked. “Yes, ma’am,” Kyle said.

When asked about his mindset before the first kill, Kyle said it’s a lot of second-guessing. Can he handle it? Will he get in trouble? Will his superiors approve it? Will his politicians turn their backs on him?

Kyle said his first kill was a woman who held a grenade in one hand and the hand of her toddler in another. “I had to do it to protect the Marines,” he explained. 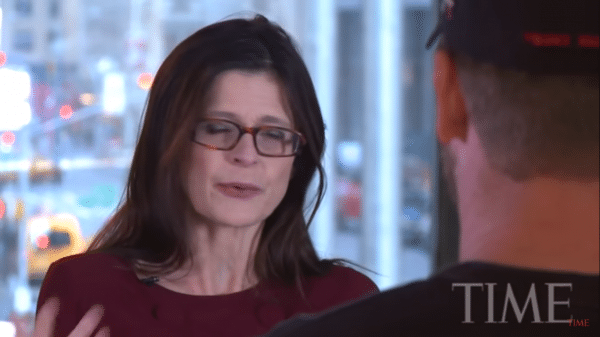 He explained that being at home versus being on the battlefield requires him to be two different people. “My wife always said that when I came home from work, I’d take my cape off and put it on the door.”

“Are there any kills you regret?” the interviewer asked Kyle.  “Not at all,” he said.

He went on to explain that most Americans don’t understand the realities of war. “The public is very soft,” he said. “You have no idea what goes on, on the other side of the world, the harsh realities that these people are doing to themselves and then to our guys. And there are certain things that need to be done to take care of them.”

To the question of his thoughts on the public perception of him, Kyle said he didn’t care what people thought of him. He described himself as a fun, loving guy who was a better father and husband than a killer.