Marcus Luttrell, the Navy SEAL and author portrayed by Mark Wahlberg in his story “Lone Survivor,” took on a civilian in a friendly shooting competition to determine who was more accurate.

Luttrell took on Blaze editor Jason Howerton in a “one shot” competition to determine who could more accurately hit the paper target with only one shot. 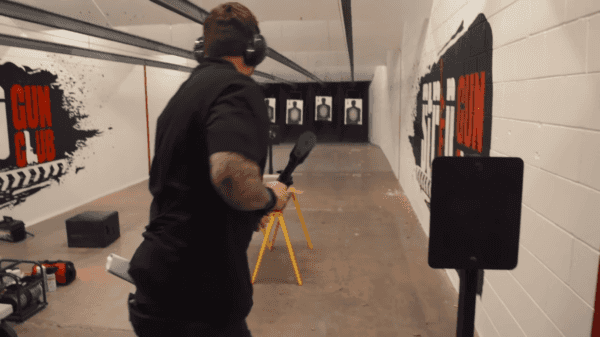 To be fair, Howerton hit the target nearly dead on, but there is one thing that stands out. Shooting accurately is completely different when facing a life or death situation when the enemy is firing back.

Luttrell has been trained in the military to handle deadly situations and to accurately fire at enemies even when his life is on the line.

In this situation, both Luttrell and Howerton are in a closed-off environment where they are given all the time they need to fire at a paper target. 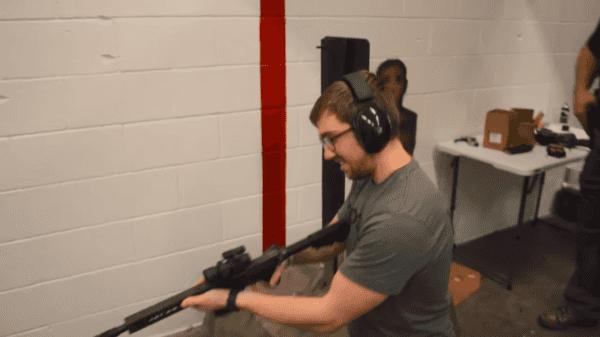 Civilian takes on Marcus Luttrell in a shooting competition (YouTube)

However, this challenge is all in good fun and both were good sports about it afterward.

Check out the video below to see who won this challenge between a civilian and Navy SEAL Marcus Luttrell.

Marcus Luttrell is a retired U.S. Navy SEAL and recipient of a Purple Heart and a Navy Cross for his actions against the Taliban during Operation Red Wings in June 2005.

Luttrell enlisted in the U.S. Navy in 1999 and after graduating from training camp and Hospital Corpsman A-school, he transferred to the Navy SEALs graduating with Class 228 on April 21, 2000.

In April 2003, he was deployed to Iraq with SEAL Team 5 to destroy any Iraqi resistance and eliminate terrorists.

In 2005, Luttrell was deployed to  Afghanistan in 2005 with SEAL Team Ten as part of SEAL Delivery Vehicle Team One (SDV-1).

In June 2005, a U.S. Navy SEAL reconnaissance and surveillance team, including Luttrell, was tasked with inserting near suspected safe buildings of Ahmad Shah, an anti-coalition militia leader, and then identify Shah and his men and their specific locations. They would then guide a direct action team to kill or capture Shah and his men.

After moving to an overwatch position to observe Shah, the team was discovered by local goat herders. Lt. Michael Murphy made the decision to release them by adhering to the rules of engagement because they were civilians and not combatants.

The team retreated knowing that they were likely compromised because of the goat herders, but were furiously attacked by Shah and his men within an hour.

They tried to contact their combat operations center, but could not communicate with them more than enough to tell them that they were under attack. Everyone on the team was killed except for Luttrell who had suffered several fractures, a broken back and other serious wounds. He regained consciousness and was rescued by local Pashtun, who saved his life by giving him sanctuary until U.S. forces could extract him.

During the search and rescue efforts, a quick reaction force helicopter was shot down by a rocket-propelled grenade, killing all eight U.S. Navy SEALs and all eight U.S. Army Special Operations aviators on board.

After recovering from his injuries, Luttrell deployed to Ramadi during Operation Iraqi Freedom in 2006, as part of SEAL Team Five, but suffered several injuries that led to his discharge.

In 2007, he co-authored the New York Times bestseller “Lone Survivor: The Eyewitness Account of Operation Redwing and the Lost Heroes of SEAL Team 10” which was later adapted to a film starring Mark Wahlberg.