For all intents and purposes, the 1911 double barrel pistol isn’t very practical due to its unwieldy design, but it sure does put on a show. This gun was the very first industrial double barrel semiautomatic pistol ever and was designed by Italian armorer Nicola Bandini and manufactured by Arsenal Firearms, according to The Truth About Guns. 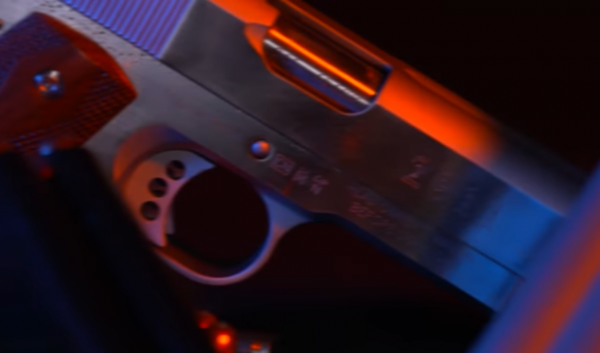 They fire .45 ACP, weigh almost five pounds and measure 8.66 inches in length, with a barrel length of 4.92 inches. The trigger is a double independent with a single spur. The guns that Miculek has in the video come from Arsenal Firearms. The company sent him two to try.

Miculek starts off with both of the 1911 double barrel pistols and ten bucks worth of ammo. The rapid fire knocks the target over and, after firing, Miculek can be seen shaking his hands from the force behind the pair of pistols.

In the slow motion playback, when those bullets leave the gun, you can see the flame inside the barrel and a ton of smoke, confirming the mighty force behind each shot. The bullets certainly have no mercy for the target, and deliver 460 grains of lead downrange.

The gun is quite large and features a metal divider between the two massive grips.

When the target is struck, there is a noticeable diagonal penetration pattern where the two sets of side-by-side barrels align. 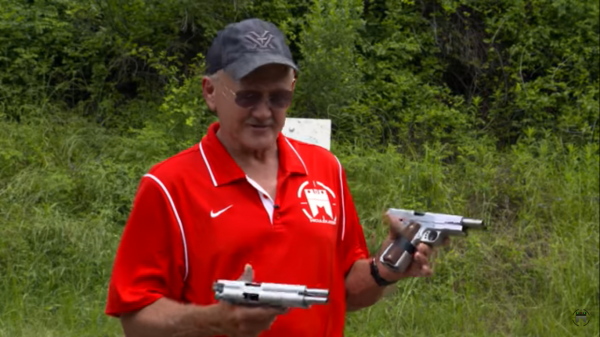 According to The Truth About Guns, the gun is “awkward to hold and the grip safety is hard to engage, making an increase in recoil and reducing the muzzle control.”

The double barrel pistol is a tribute to the original Colt 1911 service pistol, and is intended for sport shooters and hunters.

Miculek admits he has never fired this type of gun before and expressed uncertainty when reviewing the specs for the gun. Once he starts firing he gives his best performance with both guns and four barrels and doesn’t seem to have a hard time with either pistol.

Miculek empties the chambers of magazines of both guns in under 1.5 seconds, and lets out a howl of delight when the guns are empty.

50 Years And Counting! The AC-130 Hercules Is Still Firing On All Cylinders