The United States Air Force’s B-52 bomber has been one of the most feared aircraft since its introduction in 1955. The famous aircraft has certainly stood the test of time having served in every war over the last half century. The behemoth remains a staple in the U.S. Air Force’s fleet with more than 50 in active service around the world.

Video captured in 2016 from the Air Force Global Strike Command (AFGSC) offers an in-depth look at the cockpit of the B-52H and the brave airmen that make up the elite B-52 team. AFGSC is a Major Command of the United States Air Force based at Barksdale Air Force Base in Louisiana. The unit is a direct descendant of the Cold War-era Strategic Air Command (SAC).

A B-52 aircraft waits for take-off. (Gung Ho Vids/YouTube)

In the video, the viewer rides inside the cockpit of the B-52 as it takes off with two Air Force crewman at the helm. The vast array of controls and gauges demonstrate the complexity of the aircraft, but the pilot and co-pilot fly the nearly 200,000-pound giant with ease.

The massive bomber has a wingspan of 185 feet and is capable of flying as high as 50,000 feet at subsonic speeds.

The training exercises featured in the clip include a mid-air refueling. The dangerous maneuver involves the B-52 flying within a few feet of a second aircraft and connecting a probe.

The aircraft continue their flight connected to one another until the refueling process is complete. The entire exercise requires immense control from each of the aircraft and an intense level of cooperation from both crews. 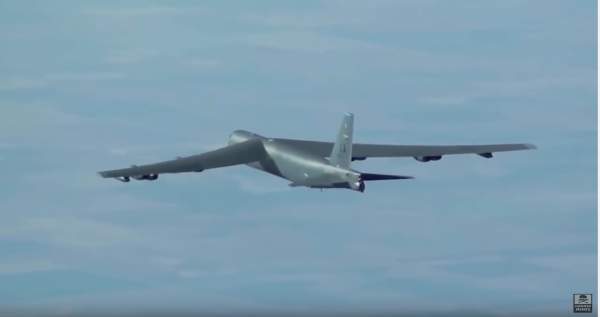 The video also includes multiple members of the B-52’s crew coordinating a carpet bomb on a small island. The training exercise involved some 20+ missiles hitting the target.

More recently, the B-52H has also been fitted to carry nuclear weapons.

Boeing has manufactured 744 B-52 bombers over eight different iterations since it was first introduced, and the aircraft holds the title as the longest-serving military aircraft in U.S. history.

After 60 years in service, the B-52 was upgraded over a two-year span beginning in 2013. Following the upgrades, the B-52 will likely remain active for another 50 years.