Rob Riggle is one of the biggest names in comedy. From his roles in movies like Step Brothers and Dumb and Dumber To, to TV roles on Saturday Night Live and Fox NFL Countdown, Riggle is everywhere.

But what people don’t know is that he is a Marine Corps vet, attended flight school and was deployed numerous times. He served in Liberia, Kosovo and Afghanistan, not to mention at ground zero on 9/11 where he helped look for survivors in the days following the attack.

In 1990, Riggle joined the Marines after getting his pilots license, trying to become a Naval Aviator. However, he left flight school to pursue a career in comedy.

He became a member of the Marine Corps Reserve and was a “military analyst” for “The Daily Show,” often talking about his military experiences and saying he could kill anyone else on the show.

Riggle attained the rank of Lieutenant Colonel and retired from the Marine Corps Reserve on Jan. 1, 2013. 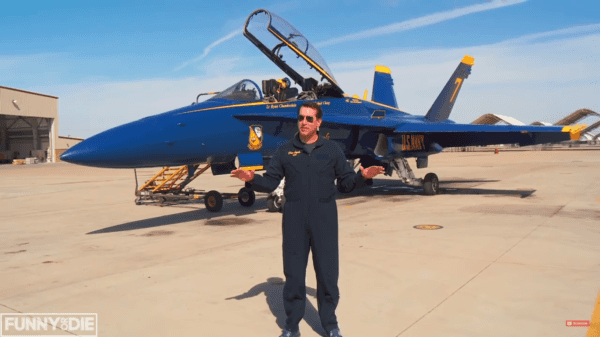 When Riggle heard there was going to be a second Top Gun movie, he knew he had to audition. So he teamed up with the Blue Angels and got to it. The result of his flight turned into comedy gold and there is no doubt that he deserves a role in the upcoming movie alongside Tom Cruise, even if it “guy who kind of knows Maverick.”

Riggle wanted to be the first one to get a shot at a role in the film, so he got in contact with the Navy Blue Angels, the United States Navy’s flight demonstration squadron, and made his audition tape. 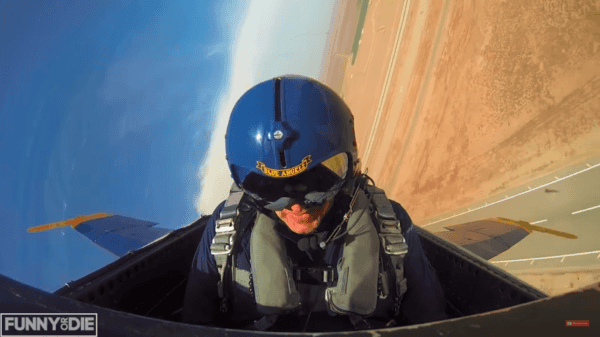 Check out “Ringtone” in action as he takes the “highway to the danger zone.”

Even though Riggle has plenty of experience in the air, he is not fully prepared to take on the G-forces the McDonnell Douglas F/A-18 Hornet provides.

The Navy Blue Angels flight demonstration squadron was formed in 1946 and currently fly in more than 70 air shows each year with roughly 11 million spectators watching for the entire year.

The Blue Angels fly in Diamond Formation at the beginning of the show and perform a number of maneuvers at low speeds.  Solos perform the aircraft’s high-performance capabilities including tight turns, slow rolls, fast rolls, high-speed and low-speed passes. At the end of the show, Solos join the Diamond Formation and create the Delta Formation.

The mission of the Navy Blue Angels is “to enhance Navy recruiting, and credibly represent Navy and Marine Corps aviation to the United States and its Armed Forces to America and other countries as international ambassadors of good will.”