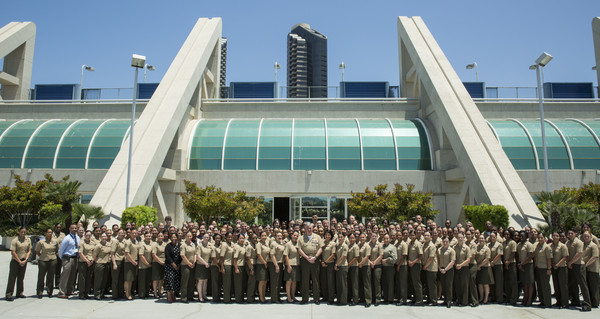 Hosted by the Sea Service Leadership Association, the event brought together women from all U.S. service branches and 20 other countries. The theme of the symposium, “The Power Within You,” included question and answer panels, service-specific breakout sessions and lengthy discussions with the Assistant Commandant of the Marine Corps, Gen. Glenn M. Walters and the Commander of Marine Forces Cyber Command, Maj. Gen. Lori M. Reynolds, the Corps’ senior female Marine.

Reynolds expressed the ultimate goal of the symposium is for women Marines to be encouraged and reminded they are not alone.

“Being a woman in this organization is not always easy, so it helps to have somebody out there fighting for you and with you,” said Reynolds. “This is an opportunity that you can make your voice matter.”

Walters thanked everyone, including the few men in the crowd, for attending and spoke about the distinct value of women in the military.

“All women serving are unique,” said Walters. “Throughout our history you’ve always been volunteers.”

“Integration is not only the right thing to do, integration is essential to winning our nation’s battles to maintain our freedom, all in an environment where only 29% of our population is qualified to serve,” said Walters.

In addition to the symposium, Thursday evening Walters joined the Women’s Museum of California in their celebration of “100 years of women serving in the Marine Corps.” Walters, on behalf of the Marine Corps, presented artwork to the museum, inscribed with “Honoring the thousands of women who earned the title Marine.” The art will be displayed at the museum, located in downtown San Diego.