What it means to be a Lazy E 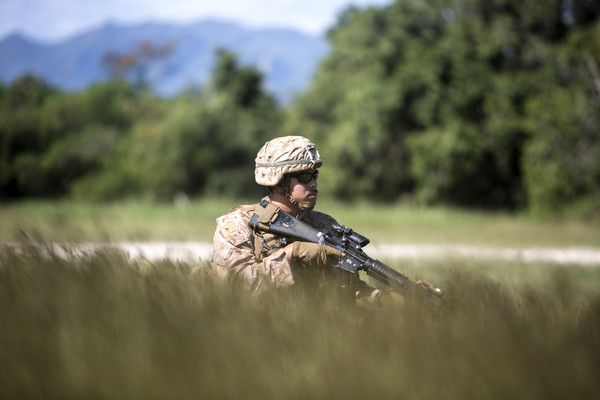 KOUMAC, New Caledonia — Whether it’s building schools or changing battle space, Combat Engineers have always been there to pave the way.

Though established in 1775, they didn’t see much recognition until the War of 1812, where Chief Engineer Col. Johnathan Williams and his successor Joseph Swift built expanding fortifications around the New York Harbor. This includes an 11-pointed fort that is now the base of the Statue of Liberty.

Today, the combat engineer brings both constructive capabilities, e.g. building bunkers, providing utilities and destructive capabilities, e.g. demolition and breaching support on the battlefield. This unique combination of capabilities provides knowledge, experience and skills to commanders at the operational and tactical levels with which they can, according to Marine Corps Warfighting Publication 3-34, reduce friction, facilitate maneuver and improve the morale of friendly forces or create friction and disorder for the enemy.

“My favorite thing about being a Combat Engineer is that my job is so versatile,” said Lance Cpl. Joseph Manzie, combat engineer with Marine Rotational Force – Darwin 18. “I can build schools for communities, or obstacle courses to keep Marines fit to fight. I also have the ability to change battlespace by performing breaches, sweeps and engineer reconnaissance.”

Breaching actions are the tactics a unit will execute when they reach an obstacle. Forces who encounter an obstacle either attempt to bypass it or reduce it.

Sweeps are typically conducted with a compact metal detector to search for materials that may be used against friendly forces or be of intelligence value.

Engineers also perform their own reconnaissance, consisting of methods to obtain information about the activities and resources of an adversary or to secure data.

“It’s always a rush being able to reduce obstacles with explosives,” said Lance Cpl. Johnathan Sacre, combat engineer with MRF-D. “Being a Combat Engineer is probably one of the best jobs in the Marine Corps. I enjoy every minute of it.”

Combat Engineers also enjoy their jobs because it helps them to develop or refine skills that can help them later in their career, said Manzie.
Manzie, who was a prior vehicle operator for the U.S. Air Force, thought it was time to expand his career from behind the wheel, so he joined the Marine Corps as a Combat Engineer.

“I selected Combat Engineering because it was a job that I was able to gain skills from and be combat oriented,” said Manzie. “I plan on taking my knowledge of demolitions, wood-frame construction and concrete construction with me to future [work].”

Being a combat engineer can be a risky business. Service members in the Middle East relied on Combat Engineers to detect different kinds of Improvised Explosive Devices, or IEDs. These engineers who took the first steps into mission critical areas provided intelligence to help shape a safer battle field for our service members today.