Walking together in unity 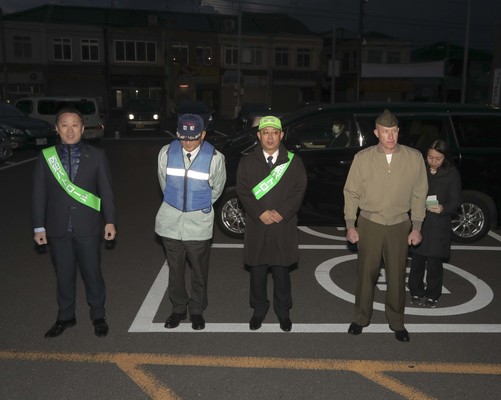 The purpose of the biannual walk was to have leaders within each community come together to ensure Iwakuni remains safe so the two communities can continue living in harmony.

“These walks are fantastic,” said Fuerst. “We have a great relationship with Mayor Fukuda and the people of Iwakuni City. It is great to get out and see the Japanese citizens as well as the American Status of Forces Agreement members out and about and getting along.”

The walk consisted of touring popular local areas where they spoke to business owners as well as Japanese and American customers. The two leaders also answered questions from the local media on topics affecting local Japanese and air station residents.

“I hope air station residents and Japanese locals can continue enjoying Iwakuni together,” said Fukuda. “By walking together we are ensuring we have the same goal, which is to live in a safe and secure community together.”

Mayor Fukuda also mentioned his dedication to the safety of both communities by stating he will directly speak with Marines and Sailors at weekly safety briefs.

Since 2009, the walks have been a display of unity between the leaders of each community and help ensure continued harmony through communication, partnership and understanding.