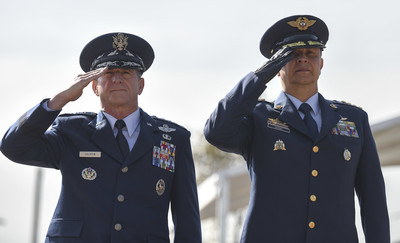 BOGOTA, Columbia (AFNS), Nov. 16, 2018 — Air Force Chief of Staff Gen. David L. Goldfein concluded a two-day visit to Colombia on Thursday, reinforcing bonds with one of the United States’ closest allies in Latin America and pledging to accelerate joint training activities with an air force he called the “gold standard” in the region.

The visit was Goldfein’s first as the Air Force’s highest-ranking officer to a country that has worked closely with the United States on an assortment of regional and security concerns for decades. At the same time, Goldfein’s visit took place amid heightened regional concerns that underscored the importance of maintaining the longstanding ties the countries share.

“Colombia is the gold standard when it comes to securing a country and forging a positive way forward,” Goldfein said during an address to a collection of senior leaders, junior officers and non-commissioned officers, noting that the Colombian Air Force participated in the last U.S. Air Force Red Flag exercise.

As he did throughout the two-day visit in Bogata, Goldfein praised the Colombian military – and specifically its air force – for its high performance and partnership.

“As our national defense strategy states, we cannot win without coalition partners. … Colombia has been, and will continue to be, a capable and willing partner of the United States,” Goldfein said.

In addition to policy discussions that ranged from strategies for Colombia’s ongoing actions to defeat narco-terrorism, security implications triggered by political turmoil in neighboring Venezuela and Colombia’s potential for training pilots from other countries in light attack, there was pomp and ceremonies that captured the two countries’ relationship.

In a ceremony at the Memorial Heroes Caidos en Combate, or Fallen Heroes Memorial, Goldfein laid a wreath to honor Colombian troops lost in battle.

Later in the day during a gathering of senior leaders from both air forces, Colombia’s highest-ranking air force officer, Gen. Carlos Eduardo Bueno, told Goldfein, “The United States and the United States Air Force will always be considered our principle strategic ally.”

Before departing for Washington, Goldfein also bestowed the Legion of Merit to Bueno. In presenting the award, which is one the highest honors the military confers, Goldfein said it reflected Bueno’s leadership in transforming the air force into “an island of excellence.”

While only two full days, Goldfein’s visit was a whirlwind of public events as well as private discussions with Colombia’s military leadership. It included an hour-long session with Gen. Alberto Mejia who is the Colombia’s parallel to the chairman of the Joint Chiefs of Staff.

Like Bueno, Mejia highlighted a strong and productive history of cooperation between the two nations.

“You are part of everything we do and we are proud of that,” Mejia told Goldfein. “That kind of partnership is making an incredible difference.”

He thanked Goldfein and the United States for working closely on both establishing and executing interoperability. Demonstrating that capacity is important now that Colombia has been designated a NATO global partner. Mejia also thanked Goldfein for Colombia’s participation in the last Red Flag exercise.

But Mejia also noted a collection of difficult issues that could test the relationship. Among the challenges are the continuing threat to Colombia’s stability from nacro-trafficking as well as ongoing problems in Venezuela that have triggered a flow of refugees to Colombia.

Goldfein’s trip was the most recent example of senior U.S. officials visiting Colombia this year. In addition to Mattis, U.N. Ambassador Nikki Haley as well as Admiral Kurt Tidd, head of U.S. Southern Command, visited the country. Former Secretary of State Rex Tillerson also came to Colombia when he served.

For the United States, the interest is both strategic and longstanding.

In 1822, for example, the United States became one of the first countries to recognize the republic of Colombia and to establish a resident diplomatic mission in the country.

“As we address an ongoing political and humanitarian crisis in Venezuela, Colombia represents a stable, democratic neighbor to the west,” they wrote.