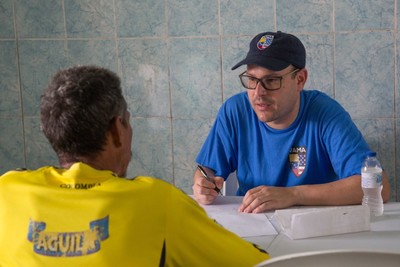 RIOHACHA, Colombia (NNS) — Patriotism highlights an individual’s greatest qualities, from loyalty to countrymen and honoring them in the way one sees fit, to the courage it takes to stand and act when others see little hope in resolution.

Patriots commit themselves to a cause of the utmost importance, jumping into the fire when lives are at stake. Accepting detrimental risk for their people, clinging to the disposition; if they don’t act, who will?

The Venezuelan-American Medical Association (VAMA) partnered with the multinational medical team embarked on hospital ship USNS Comfort (T-AH 20) to engage in the Enduring Promise mission in Central and South America.

“When we got called to be invited to do this mission,” said Dr. Rafael Gottenger, a plastic surgeon and vice president of VAMA, “we came to work hand-in-hand with the surgeons and doctors on the ship. We are seeing a nice integration with the Navy doctors and the VAMA doctors.”

VAMA joined the mission to provide medical care in Riohacha, Colombia. Members also hoped to have the opportunity to care for their countrymen of Venezuela, many of whom are migrating to Colombia for access to health care. Riohacha is only 60 miles from the Venezuelan border.

“Being that we are doctors and we were born in Venezuela, we couldn’t just watch,” said Gottenger. “So, at that point, we decided that we needed to do something. We talked about it and decided that we were going to help by sending supplies, trying to create awareness on social media, trying to advocate for a humanitarian channel in the U.S. and also creating a catastrophe committee in case there was a need for us to come and help.”

After a few days of working in Riohacha and aboard Comfort, Gottenger was excited to see how well the team of many countries worked together to achieve a mutual goal of providing the best health care possible.

Another member of VAMA, Dr. Javier Andrade, a general surgeon who specializes in minimally invasive surgery, believes VAMA’s value in the mission doesn’t just begin and end with their medical expertise, but also the human element they bring based on their cultural knowledge and that they are bilingual.

“I’m here working with the Navy surgeons to treat general surgery patients,” said Andrade, “or assist throughout the pre- and post-surgery process. Given that I am fluently bilingual, I can help explain to the patient their condition before and after the surgery. With someone that speaks Spanish and is actually knowledgeable about what procedure the patients are going to have, I think it really helps for the mission.”

Andrade was at a land-based medical site providing surgical screenings and was glad he was able to find a beneficial surgery for a lot of patients they probably would not be able to get otherwise.

“I feel good about getting these kids on board and discussing their cases with other specialties,” said Andrade, “helping the patients through the process, even if it’s just giving moral support or just translation. If I get to do the operation, it’s great, but even if I am just assisting in it, it feels good.”

VAMA members said they are very thankful for the opportunity to serve the people of that part of the world, and that someone is taking time to give support to the people of those countries.

“We are very thankful for the Comfort’s support,” said Gottenger. “And we are very proud to serve our country, being that we are U.S. citizens. It has been an honor to be with all these people, who have been taking their time to go ashore and to be here to help these people. We are happy to be part of the team.”

USNS Comfort in Honduras: Opening Ceremony Held at a Land-based Site in Trujillo