USNS Comfort in Honduras: Opening Ceremony Held at a Land-based Site in Trujillo 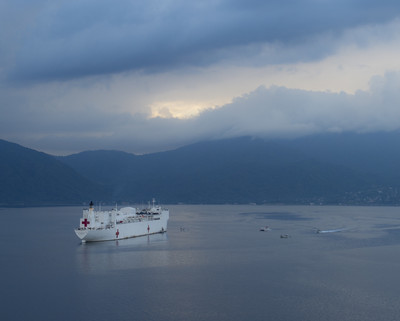 This opening ceremony marks the beginning of the fifth and final stop of Comfort’s Enduring Promise mission in Central and South America.

“The foundation of every long-term, successful cooperation is trust and shared values,” said U.S. Navy Capt. William Shafley, commander, Task Force 49. “We build trust as we work with one another to provide care to those in need. We are successful when we are working together.”

A team comprised of more than 900 medical personnel, including military, non-governmental organization volunteers and members from partner nations, began screening surgical patients Thursday, Dec. 6. The opening ceremony signified the commencement of the medical sites’ full operability, which will treat patients for five days.

“The medical team aboard the USNS Comfort will work alongside the government of Honduras to provide top-quality medical care to people in need,” said Shafley. “This is Comfort’s second visit to Honduras and her sixth mission to South and Central America.”

“The presence of the ship in the Port of Trujillo represents the continued support of the American armed forces and their solidarity with Honduras,” said Aguilar, translated from Spanish. “We want to express our appreciation from the Honduran government as well as the Honduran people.”

Comfort’s past missions, in North America, Central America, South America and the Middle East, have provided medical treatment to more than 390,000 patients, including 6,000 surgeries.