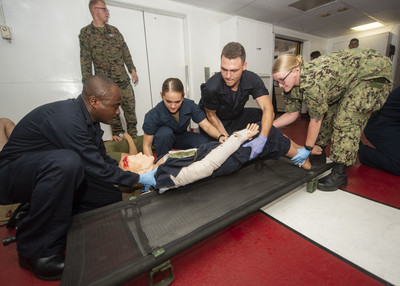 “A mass casualty event, by nature, is chaotic,” said Lt. Jessie Paull, a general surgery resident embarked on Comfort. “Being able to practice, it gets your nerves under control.”

The event started on the flight deck of the ship and continued down to Comfort’s casualty receiving area.

“Getting the team squared away is essential to execute this mission during a real event,” said Paull.

“This is exactly what I would hope to see coming from a group of professionals on, essentially, day three of our mission,” said Capt. William Shafley, commander, Task Force 49.