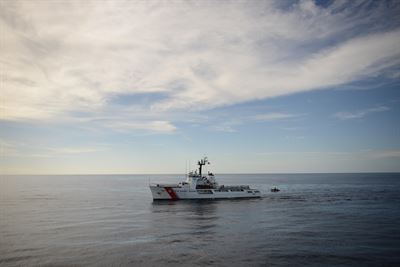 The crew of the Diligence performed a wide range of Coast Guard missions during the patrol, from public affairs in Philadelphia, Pennsylvania, to drug interdiction operations stretching from Mexico to Panama.

The Diligence crew patrolled in support of the Joint Interagency Task Force (JIATF) South in the Eastern Pacific as part of Operation Martillo. Along with JIATF South, the U.S. Coast Guard works alongside interagency and international partners to prevent and respond to illegal maritime migration and narcotics smuggling from South and Central America.

Law enforcement personnel from Diligence interdicted three high-speed vessels smuggling narcotics and forced one vessel to jettison its contraband before fleeing. Overall, Diligence prevented nearly 2,500 kilograms of cocaine worth more than $60 million from making it to the U.S.

The Diligence crew transited to Philadelphia to provide public outreach. The Independence Seaport Museum has a full-scale waterline model of Schooner Diligence, circa 1797. The model was completed earlier this year and is currently on display in the Patriots & Pirates exhibit. The arrival of Diligence provided an example of service history, and crewmembers gave tours of the ship to approximately 250 people over the weekend.

“We’re very proud to have been part of the efforts to combat the flow of illegal drugs to our nation,” said Cmdr. Justin Carter, the commanding officer of the Diligence. “It was an exciting patrol, and our crew performed exceptionally during every opportunity to we had to pursue and interdict smugglers at sea, and throughout a deployment that had great challenges. We are thankful to be home and with our families after a great deployment!”

The Diligence is a 210-foot medium endurance cutter homeported in Wilmington, and it’s primary missions include counter drug and migrant interdiction, enforcing federal fishery laws and search and rescue operations.