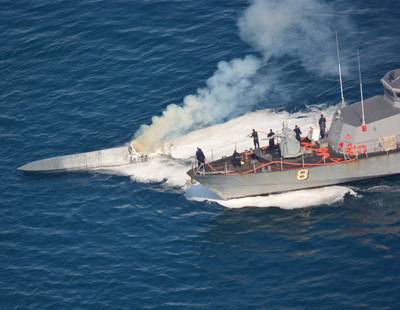 During a routine counter-narcotics patrol, an AMO P-3 aircraft detected an LPGFV, which is a custom made ocean-going, high-speed motor boat built by drug traffickers to smuggle large quantities of illegal drugs. The boats are primarily made of fiberglass and they travel barely above the surface making them difficult to see or detect by radar.

The AMO P-3 crew reported the LPGFV to the Joint Interagency Task Force-South, which vectored the Zephyr to make the interdiction.

As the Zephyr changed its course to intercept the vessel, the suspected smugglers allegedly began jettisoning their cargo and jumped into the water as their boat caught on fire.

A Coast Guard law-enforcement team in an interceptor boat launched from the Zephyr interdicted the LPGFV, rescued four suspected smugglers and transferred them to the Zephyr. The Coast Guard and Zephyr crews extinguished the fire aboard the LPGFV after fighting it for approximately 90 minutes.

“There was no doubt in our minds what needed to be done to salvage the evidence needed for a successful prosecution even if it meant laying Zephyr alongside a burning hull, with the intense heat and acrid smoke hindering our 90-minute firefight,” said Lt. Cmdr. Grant Greenwell, commanding officer of Zephyr.

After the fire was extinguished, a Coast Guard law-enforcement team with members from both Maritime Safety and Security Team 91112 based in New Orleans, and the Pacific Tactical Law Enforcement Team based in San Diego, recovered approximately 1,080 pounds of suspected cocaine from the LPGFV. During the recovery, the “07 de Agosto” arrived on scene to work with the Coast Guard law enforcement team to document the case. This case marks the first drug interdiction for MSST New Orleans after becoming a pursuit-designated unit in July 2017.

“This was an incredible team effort, between our MSST, the law enforcement detachment and USS Zephyr crews to save four lives, put out the fire and recover half a ton of cocaine,” said Lt. Cmdr. Mike McGrail, commanding officer of MSST 91112. “This case truly highlights the danger and unpredictability our crews face every day interdicting narcotics smugglers on the open ocean.”

The LPGFV was severely damaged by the fire and was subsequently sunk as a hazard to navigation.

“This interdiction serves as an example of how interagency collaboration can lead to the successful disruption of transnational criminal organizations,” said William Durham, director of AMO’s National Air Security Operations Center-Corpus Christi. “Continuing to keep our country safe from these criminal networks requires unity of effort during all phases of interdiction.”

In addition to Coast Guard crews, numerous U.S. agencies from the Departments of Homeland Security, Defense and Justice along with allied and international partner agencies, such as the Colombian navy, are involved in the effort to combat transnational criminal organizations. Counter-drug operations in the Eastern Pacific require unity of effort in all phases from detection, monitoring and interdictions, to prosecutions by the Department of Justice and partner nations.

As part of its Western Hemisphere Strategy, the Coast Guard has increased its presence in the Eastern Pacific Ocean and Caribbean Basin, which are known drug-transit zones off of Central and South America. During at-sea interdictions in international waters, a suspect vessel is initially located and tracked by U.S. and allied, military or law enforcement personnel. The interdictions, including the actual boardings, are conducted by Coast Guard members.

EDITOR’S NOTE: Information contained in this release was held pending review by the U.S. Attorney’s Office, Colombian Navy, U.S. Coast Guard, U.S. Customs and Border Protection and U.S. Navy investigators until a thorough review of the interdiction was conducted.