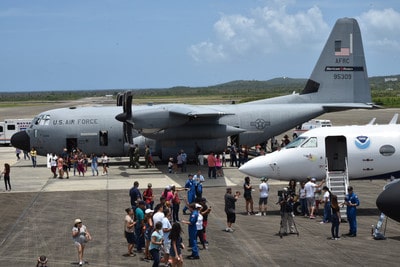 With the 2019 hurricane season fast approaching, NOAA and the U.S. Air Force Reserve will host a series of events, including tours aboard the hurricane hunter aircraft, to help communities in Mexico and the Caribbean prepare for the season and the coming storms.

National Hurricane Center Director Ken Graham and several federal hurricane specialists will visit with residents of vulnerable communities and discuss hurricane preparedness, resilience and how they can become “weather-ready.” Tours of the Air Force Reserve Command’s WC-130J “Hurricane Hunter” will offer an opportunity to learn how scientists collect hurricane information. The NOAA WP-3D aircraft, used for both hurricane forecasting and research, will be on display as well.

“It’s so important to know your risk to the specific hurricane hazards, whether its coastal storm surge, freshwater inland flooding or high winds,” said Graham. “Every storm is different.”

Locations and local times for public tours are:

During hurricanes, military aircrews fly state-of-the-art WC-130J aircraft directly into the core of tropical cyclones to gather data that are critical for forecasting a hurricane’s intensity and landfall. The data is sent in real time via satellite from the aircraft directly to NOAA’s National Hurricane Center for analysis and use by hurricane forecasters.

“Planning ahead is important for everyone; individuals, businesses and local governments,” said Lt. Col. Kaitlyn Woods, 53rd Weather Reconnaissance Squadron chief meteorologist. “We gather this weather data to assist the National Hurricane Center forecasters with their storm track and intensity forecasts ensuring the public has the most up to date information so they can make the best decision for them and their families, to stay or evacuate.”