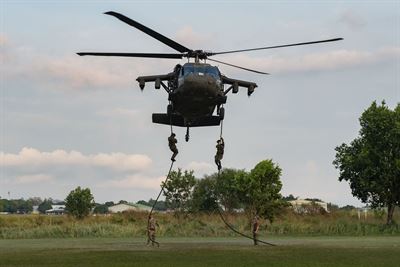 Operation Serpiente was the largest air assault exercise of its kind to take place in El Salvador in recent years, requiring an expert level of partnership cooperation among ground and air assets.

“Synchronization of tasks and having different people working on different efforts, all at the same time, came together so we were prepared to conduct the training and the missions safely,” said Lt. Col. Richard Tucker, 1-228 AVN commander, “We worked with the Special Operations Forces teams here, who brought the specialized tactics and mission planning.”

1-228 AVN provided airlift support at the request of the U.S. Special Forces group, who are currently training three elements of Salvadoran forces.

According to the U.S. Army, air assault operations are meant to rapidly re-position personnel and equipment to enable the combined arms team to strike over extended distances and terrain to attack the enemy where and when it is most vulnerable by utilizing vertical take-off and landing aircraft—such as the helicopter—to seize and hold key terrain which has not been fully secured, and to directly engage enemy forces.

The week’s training momentum began with a day of progressive rounds of Salvadoran personnel practicing rappel and fast-roping from UH-60 Blackhawk helicopters in a nearby soccer field at Ilopango Airport. Approximately 45 partner nation personnel accomplished 490 rappel and fast rope executions.

Additionally, the 1-228 AVN Medical Evacuation Company provided tactically focused first-aid and medical evacuation training and procedures to personnel assigned to the U.S. Embassy. They practiced techniques that incorporated the Blackhawk helicopter platform such as loading patients and testing timeline capabilities.

The next day’s training mission involved a jungle insertion and a scenario-based exercise where personnel rappelled from two UH-60 Blackhawk helicopters into a jungle environment, engaged enemy forces and secured the area. This double-ship air assault enabled the Soldiers to move quickly to their objective and seize the initiative from the opposing force.

The third day of training consisted of helocasting into Lake Ilopango. Helocasting is an airborne technique used by small unit, special operations forces to insert personnel into a military area of operations.

“This was a self-starting program,” said Tucker, “The Special Operations teams provided us with rescue Zodiac boats and [the 228th] cast about 70 swimmers into Lake Ilopango. At the same time we validated and trained people out of our MEDEVAC Company for the over-water hoist rescues. So we had two separate lanes going at the same time in the lake.”

The final day of training and culminating event, was an air assault that integrated all of the ground forces that were held previously during the week, as well as the aviation and U.S. Special Operations advisers, into a full mission profile.

The notional target was an abandoned hotel along the coast—the targeted area has real-world challenges with organizations that negatively influence the nation here. The air assault was conducted utilizing fast rope insertion onto the roof of the building. The assault team had to again move quickly to their objective and seize control of the building.

Both air assault missions this week concluded with a MEDEVAC exercise, which helps build confidence in partner nation forces. It is important for personnel to know what to expect when a MEDEVAC helicopter arrives and how to approach the helicopters, load patients aboard and how to interact with their crew chief and flight medic in order to do ground handoffs.

Additionally, during this final mission, the 1-228 AVN employed a forward arming and refueling point via CH-47 Chinook helicopter with extended range fuel tanks. This capability validated training for petroleum supply specialists. A command post was also established in order to synchronize the forces further away from the operations area at Ilopango Airport.

To many people, an air assault operation may seem simple: get on a helicopter, fly and fight. The reality is that, like most military operations, it is a complex synchronization of moving elements.

“We had a willing and able partner nation force that wanted to train and is involved with the U.S Special Operations forces here,” said Tucker, “We had a group of leaders and planners who truly bought into the training objectives. We went through the efforts of investing the right assets and personnel who maintained the flexibility and aggressiveness to get through all training objectives.”

Extensive planning is required to organize aircraft movement, logistics challenges of supplying and sustaining dozens of Soldiers and their equipment for a multiple-day sustained engagement.

“We made the mission happen for the partner nation ground commander who wanted to train their Soldiers, and by doing this we also trained our Soldiers at the same time. We held everyone at a high standard.” said Sgt. Maj. Luis Romero, 1-228 AVN command sergeant major.

Once the mission was complete, the U.S. and Salvadoran teams conducted an after action review. The AAR allowed everyone to understand what went well during the training, and how they can improve the training to obtain better results in the future.

“Through training and interactions like this we want to support the efforts to have JTF-Bravo and the United States be the partner of choice for El Salvador,” said Tucker, “We met all the training objectives and it was a very successful training mission.”