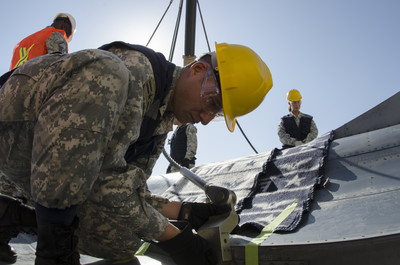 The team traveled from the U.S. to the 3rd Aviation Group at Los Condores Air Force Base in Iquique, Chile and then to the 5th Air Brigade Maintenance Group at Cerro Moreno Air Base in Antofagasta, Chile.

Gonzalez explained that the MTTs are requested and funded by the Chilean Air Force. “By us being able to provide assistance in an area that they feel a need to improve, we’re building that partnership, that relationship.”

U.S. Air Force Master Sgt. Michael Powell, 388th Aircraft Maintenance Squadron Mobile Training Team member, explained that the MTT taught the basic principles of how to preserve the area surrounding an aircraft mishap for an investigation and recover a damaged or disabled aircraft.

“The course being in English actually helped me,” said Chilean Air Force Airman Gonzalo Payacan, 5th Air Brigade Maintenance Group F-16 Fighting Falcon crew chief. “All of the Technical orders of my specialty are written in English. The course helps me prepare when needed.”

Throughout the training course, the Chilean Airmen were given classroom instruction covering an aircraft recovery plan, personnel protective equipment, and CDDAR operation followed by hands on training.

Chilean Airmen demonstrated their knowledge by responding to a simulated damaged disabled F-16 Fighting Falcon and connecting a crane to simulate lifting the aircraft for the final objective of the course.

“To physically see the aircraft lift procedures was a great experience,” Paycan said. “I’m grateful to have experienced it.”

“It’s very important we interact with different aircraft specialties when we need to pick up an aircraft,” said Chilean Air Force Tech. Sgt. Benjamin Zepeda, 5th Air Brigade Maintenance Group F-16 Fighting Falcon crew chief. “They will have different viewpoints and they are going to be the ones lifting the aircraft.”

Upon completing the final objective, U.S. and Chilean Airmen conducted a team debrief over what went well and what could’ve been improved. The following day the U.S. Airmen held a graduation ceremony for the newly CDDAR certified Chilean Airmen.

“Thank you for your time and your patience and for giving us the instruction, life experiences and your knowledge,” Zepeda said. “The instructors did everything in their power to make the course the best.”