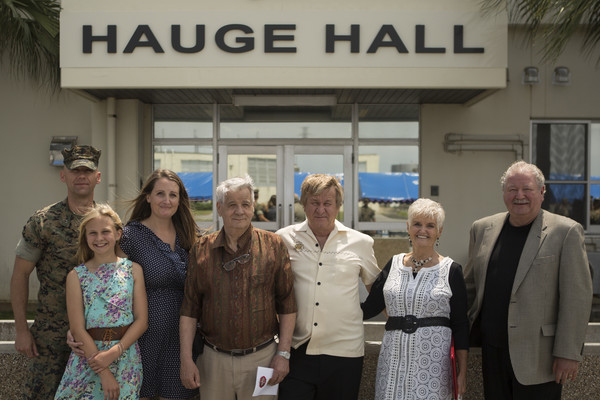 In May of 1945, the Battle of Okinawa was raging in full force. Marines and Sailors with 1st Marine Division pushed through the prefecture and were met with heavy resistance from the entrenched Japanese soldiers.

The Medal of Honor citation tells the story; a machine-gun squad, trapped by a barrage of mortar and machine-gun fire, engages in an assault against a heavily fortified Japanese hill. The squad leader, Cpl. Louis J. Hauge, sees the two guns responsible and sprints through an opening, hurling hand grenades as he runs. He is wounded before he reaches the first gun, but he pushes through to successfully destroy both enemy positions. As the second gun placement is destroyed, he is shot by Japanese snipers. His men, seeing his actions, rise from their bombarded position and finish the bloody assault on the hill.

On April 30, 2018, Marines and Sailors with Combat Logistics Regiment 35, 3rd Marine Logistics Group stood in formation in front of the regimental headquarters’ building on Camp Kinser, Okinawa, Japan as it was rededicated Hauge Hall, to commemorate the Medal of Honor recipient’s heroic actions.

“We dedicated this building to Cpl. Hauge because, after studying him and his unit, we found out that [1st Marines, 1st Marine Division], his unit, was dug in at this very camp,” said Col. Forrest C. Poole, regimental commander of CLR-35. “He and his unit defended this position while Marines traveled here to assist the southern assault.”

Hauge was born Dec. 12, 1924 in Ada, Minnesota. He left high school after his first year to work in a canning factory, where he became the assistant foreman. Hauge then joined the Marine Corps Reserve in 1943 as a light machine gunner. He saw combat on Peleliu as a message runner with 1st Marine Regiment, 1st MarDiv and was awarded a meritorious promotion to corporal. He was then appointed squad leader and sent to Okinawa.

On May 14, 1945, Hauge was killed in action. Because of his actions during the Battle of Okinawa, Hauge’s father was presented his Medal of Honor June 14, 1946.

Hauge’s nephew, Daniel Braunschweig, offered his own insight, commenting on how awesome it was to see that a family member of his is so highly esteemed in an organization where so many people do great things without recognition.