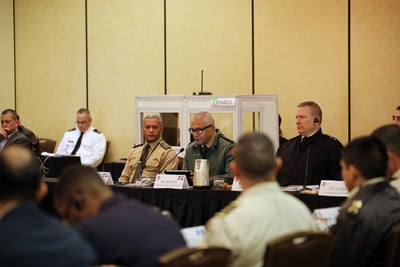 “Countering threat networks has to be a team effort,” said the conference president Maj. Gen. Mark Stammer, U.S. Army South Commander, after welcoming delegates from 18 different countries to San Antonio. “During this conference we will propose several practical initiatives that will make us more interoperable in this fight. With your help, I know that we can make these products into something that will truly benefit all of our armies and our interagency partners.”

“This specialized conference is part of a two year cycle that this year is ran by the Dominican Republic and at the conclusion of the cycle the results of this and the other specialized conferences will be presented to the army commanders of the CAA for their approval in Nov. in the Dominican Republic,” said Robert Pike, U.S. Army Liaison Officer to the CAA. “To defeat any network it takes a lot of partners. A network of networks is best. We need to include all of our interagency partners when we are planning and executing counter threat network operations.”

Pike said the main objective of the conference is to create a CAA guide to countering threat networks. This guide will be based on U.S. doctrine, but the intent is to make it acceptable for all of the partnered nations to improve interoperability by creating common themes and terminology in three languages he said. The guide will be translated into Spanish, Portuguese, and English.

“This conference gives us the opportunity to come together and get the input from all of the partnered nations,” said Pike. “One of the great things about CAA is that the U.S. is just one of the 26 members so this allows us to come together and work together on this topic. We also develop stronger relationships among the members of the CAA armies.”

Pike said that the team will work on refining the products that come out of the conference and then it will be presented to the Dominican Republic in Aug. where it will be refined and finalized.

“I am very grateful for your valuable collaboration during this conference,” said Stammer as he concluded the conference. “I believe that together we have started to create some great products that will help all of us to work together to defeat these threat networks.”