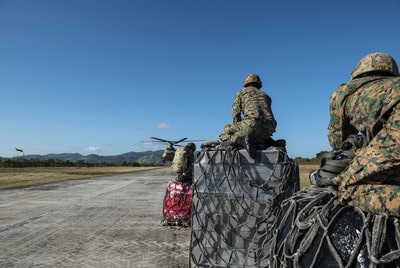 SOTO CANO AIR BASE, HONDURAS, Jan. 17, 2019 — Deep in the jungles of Panama, National Border Service agents, also known as SENAFRONT, await in a clearing, anticipating construction supplies that will help them, as they prepare to take down illicit drug and human trafficking networks that span the Americas.

The dense wilderness surrounding the agents seems alive— the breeze rustles the trees making them dance, the mountains stand tall in the distance guarding over the valley below, and the air is filled with the sounds of nature.

A whirring noise appears in the distance, seeming at first to be a trick of the senses. Gradually, the whisper evolves into a roar, overtaking the area as a CH-47 Chinook peeks over the jungle canopy and the clearing erupts into chaos as the strength of the aircraft blades whips up the dust and debris that previously lay stagnant.

“Bravo Company of the 1st (Battalion) 228th Aviation (Regiment) assigned to Joint Task Force-Bravo is part of a broader U.S. effort to assist the Panamanian government and their national border police with setting up a remote operating base out in the Darien jungle,” said Capt. Jennifer West, 1-228th Avn Regt Bravo company commander and Chinook pilot.

“A SENAFRONT installation is under construction and a lot of equipment must be moved to build it,” said Juan Carlos Varela, President of the Republic of Panama. “We do not have the equipment to transfer that amount of cargo in order to install this new SENAFRONT station, they are cooperating in that.”

Due to the outpost being located far past where the road ends, JTF-Bravo’s maneuverable rotary wing-assets can carry more weight in a faster manner than the alternative, which is to either backpack the nearly 2 million pounds of needed supplies, such as concrete and cinderblocks, or to navigate them through the jungle waterways via boats.

West described the mission as one that would be extremely challenging without the airlift support and considers it “satisfying to know we’re actually making an impact and helping the Panamanians establish a security presence in the Darien, where there’s really nothing out there but jungle.”

She explained the presence will help SENAFRONT combat narco-drug traffickers and prevent their smuggled contraband from getting onto the Pan-American Highway, the transcontinental road exploited by well-financed and heavily-armed transnational criminal groups who fuel insecurity and instability as they continue their trafficking operations towards countries north of Panama.

Last year alone, the Panamanian Security Services confiscated more than 72 metric tons of narcotics, keeping them off the streets of the Americas.

“With this being a binational issue that also has regional effects, the U.S. government has kindly offered to support us in this effort,” said Jonattan Del Rosario, Public Security Minister of Panama. “It is closely related to the binational posts that we are building in collaboration with Colombia, mainly because of the phenomenon of drug trafficking, although the irregular flow of migrants is also monitored from these centers. That is why we have developed an important effort to also pursue human trafficking networks in this administration, resulting in the effective dismantling of 22 of these networks.”

JTF-Bravo operates out of Soto Cano Air Base, Honduras, supporting its Central American neighbors as the partner of choice and helping allies to develop capabilities and improve regional security. This year will mark the fourth Darien Lift the U.S. Army has supported. So far, the crews have been able to transport 305,000 pounds of materials and are scheduled to return to continue the operation.

The Chinook is a multi-role helicopter used in a variety of situations from carrying Soldiers to their destinations to aiding combat missions. Aside from supporting this operation, the CH-47 was also used to combat Darien wildfires in 2016.

“The relationship between Panama and the United States is certainly a strong one, (us) being the partner of choice,” said West. “When the Panamanians request help from the United States government I think it hits home that we are here to help.”

Trump Pledges to Protect America from Any Enemy Missile