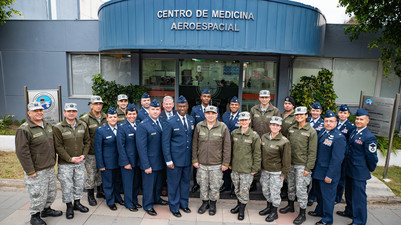 The engagement is an important milestone in the relationship between the U.S. and Chile, as the mission marks the first time the U.S. and Chilean air force have conducted a health services administration subject matter expert exchange.

U.S. Air Force Lieutenant Colonel Lisa Guzman, medical services administrator, Joint Base McGuire-Dix-Lakehurst, N.J., says the exchange is an important opportunity to strengthen the relationship between the U.S. and Chile.

“These types of exchanges are important because we have an opportunity to continue to build those partnerships with nations, foster support and friendships, and find ways to be more interoperable,” said Guzman. “From our aim, we benefit from having a better understanding of what processes (the Chilean air force) currently has in place and be better able to communicate in the future.”

“The diverse group that works in health services must know what others in their career field are doing to be better prepared for possible emergencies,” said Ximena Garcia Astorquiza, Chilean air force Group Commander and general practitioner. “I think the fundamental part of these exchanges is getting to know each other. More than a professional sense, getting to know people on a human level.”

Both parties emphasized the importance of working together to accomplish shared goals.

“It’s important to establish the necessary confidence with one another,” Astorquiza said. “Because working together, problems are solved faster and with more efficiency, independent of where in the world you are coming from.”