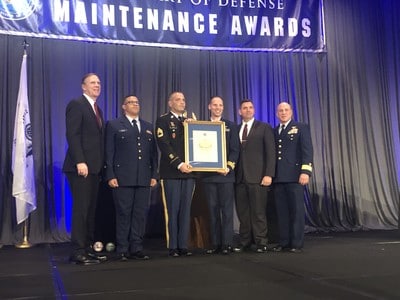 TAFT’s technical expertise is one of various forms of security assistance the U.S. provides to Caribbean nations as part of the Caribbean Basin Security Initiative (CBSI) to help the region reduce illicit trafficking, improve public security, and promote social justice.

The 15-member CBSI-TAFT is comprised of U.S. Coast Guard and Army engineers, technicians, specialists, and logisticians. It has been funded by the U.S. State Department since 2013 as part of a presidential priority.

In 2016, the team was recognized by then Secretary of Homeland Security receiving the Secretary’s Unit Award for “unprecedented interagency collaboration” for CBSI and its support to coast guards in the Caribbean.

In 2017, the team was awarded the 2017 Secretary of Defense Foreign Security Forces Maintenance Award for “outstanding achievement and excellence in all facets of maintenance mission support” during a ceremony in Salt Lake City on Dec. 5.

More on this DoD awards program at: https://dod.defense.gov/News/News-Releases/News-Release-View/Article/1698189/secretary-of-defense-maintenance-awards-announced/