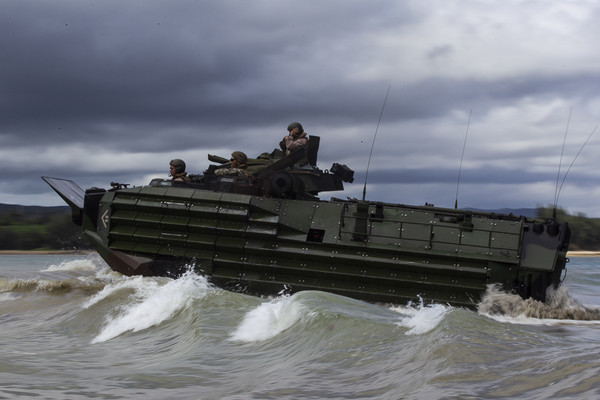 The first step for the 31st MEU to prepare for an upcoming patrol of the Indo-Pacific region is Marine Expeditionary Unit Exercise. Also called MEUEX, it is designed to integrate each component of the 31st MEU – Battalion Landing Team, 2nd Battalion, 5th Marines; Marine Medium Tiltrotor Squadron 262 (Reinforced); Combat Logistics Battalion 31; and the 31st MEU Command Element – into a cohesive crisis response force capable of a diverse set of missions at a moment’s notice.

MEUEX tests the 31st MEU’s capability to plan and launch a series of complex missions from the sea, ranging from limited combat operations to humanitarian assistance and disaster relief – with a target of six hours from orders received to mission execution, according to Col. Robert Brodie, the 31st MEU commander.

“The 31st MEU is the the cutting edge maritime crisis-response force in the region,” said Brodie.  “We are a composited task force that is rehearsed, relevant and ready to meet the needs of the geographic combatant commander, any time and any place. We have the ability to reach anywhere within the Indo-Pacific in a matter of days, if not hours, and that is a capability no other unit in the region can match.”

For each component of the 31st MEU – the Ground Combat Element, the Aviation Combat Element, the Logistics Combat Element and the Command Element – MEUEX is a two week sprint to plan, rehearse and launch specific mission-sets in and around Okinawa, where the unit is based. For the Marine Corps’ only continuously forward-deployed MEU, MEUEX sets the pace at the start of each twice-annual deployment.

It is an imperative first step, according to Brodie.

“MEUEX gives us the opportunity to refine integration of the Command Element, Aviation Combat Element, Battalion Landing Team and Combat Logistics Battalion, ensuring our ability to conduct 14 separate missions. We deploy two times each year, so obviously it is a fast-paced and requires constant rehearsal to ensure our preparedness as our nation’s 911 force in readiness,” said Brodie. “MEUEX develops our planners and small unit leaders, not to mention all our junior Marines, and prepares them for the challenges experienced underway. When we’re embarked as part of an Amphibious Ready Group, the operational tempo increases tenfold, so MEUEX helps mold all of our Marines and prepare for our partnership with the Navy.”

The 31st MEU, as a forward-deployed unit, is constantly on call to address crises throughout the entire Indo-Pacific region, stretching from Australia in the south to Mongolia in the north, and India in the west to roughly the Marshall Islands in the mid-Pacific. The vast area of responsibility features a wide array of terrain, climate, cultures and geopolitics. The 31st MEU must train to operate in everything from the jungle to deserts and mountains to coral outcroppings no higher than a few meters. They deploy with a large contingent of weapons, vehicles, equipment and personnel, aiming to be armed and equipped for any scenario, according to Maj. Jacob R. Godby, the 31st MEU’s assistant operations officer.

“The size of our AO requires us to train for a wide variety of missions which requires an extensive range of equipment and the best trained Marines anywhere,” said Godby, “In Okinawa, we have the resources and training grounds that allow us to train for almost any mission we could be tasked with. MEUEX allows us to begin putting the pieces together as we move closer to embarking for our next patrol.”

While embarked, the 31st MEU partners with the U.S. Navy’s Amphibious Squadron 11 to form the Wasp Amphibious Ready Group. The Marines and Sailors who form the 31st MEU embark aboard the ships of the Wasp ARG, and focus on area presence throughout the region while partnering with regional nations to enhance security and build ties between militaries, according to Godby.

“Being forward-deployed in Okinawa allows the 31st MEU to build solid and continuing friendships with other nation’s militaries, which helps enhance regional security and stability,” said Godby. “Every Marine and Sailor with the 31st MEU understands the importance of our role in the Indo-Pacific, and MEUEX is the first step as we lean into our next deployment.”