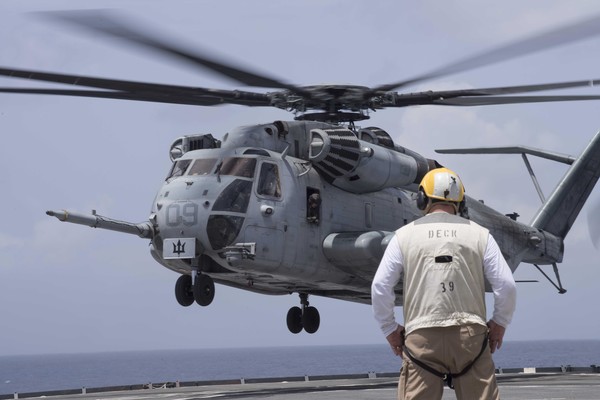 The Marines of SPMAGTF-SC worked closely with Gunston Hall sailors to qualify six pilots and five enlisted aircrew members responsible for the helicopters’ safe operation. Having qualified Marines provides SPMAGTF-SC with helicopter movement capabilities of personnel and cargo between the shore and ship.

“We gained valuable training today, exposing pilots and crew chiefs to landings aboard a dock landing ship for the first time,” said U.S. Marine Maj. David Hill, SPMAGTF-SC’s aviation detachment officer in charge. “The blue-green team worked closely to ensure safe execution and enhanced our ability to respond to a crisis anywhere within the (U.S. Southern Command) area of responsibility.”

Working toward becoming qualified to land on the deck of a ship tested the Marines’ and sailors’ ability to work together as a team. The successful launch and recovery of aircraft involves the cooperation of many departments aboard the Gunston Hall.

“It’s impressive to see the SPMAGTF-SC’s pilots and flight crews working seamlessly with the deck and communications teams of the Gunston Hall,” said Colombian Naval Infantry Lt. Col. Erick H. Del Rio, SPMAGTF-SC’s deputy commander. “Joint maneuvers like this let the Marines, sailors, and soldiers of this international formation see what they can accomplish when they work together.”

The partnership between SPMAGTF-SC and the Gunston Hall is significant in that it expands their operational capability in Latin America and the Caribbean.

“SPMAGTF-SC’s (aviation detachment) allows us to support our partners in humanitarian assistance and crisis response situations by moving supplies and personnel quickly and safely,” said U.S. Marine Col. Michael H. Oppenheim, SPMAGTF-SC’s commanding officer. “When you combine that response capability with the U.S. Navy’s geographic reach and professionalism, the multinational SPMAGTF truly becomes a maritime task force capable of working with our partners throughout Central and South America.”

“Gunston Hall’s crew is honored to have the opportunity to play such a vital role in supporting military-to-military training exercises such as the flight operations today with the SPMAGTF-SC,” said U.S. Navy Cmdr. Fiona C. Halbritter, the captain of the Gunston Hall. “We look forward to all our team can glean from working together over the next few months.”

The Marines of SPMAGTF-SC, along with their partners aboard Gunston Hall, will put their new capabilities to the test later this month when they conduct a humanitarian assistance and disaster relief exercise off the coast of Belize and Guatemala. This will further prepare them to respond to natural disasters as their deployment stretches further into hurricane season.