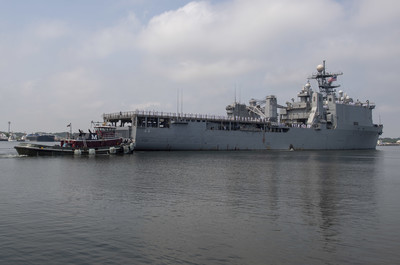 Gunston Hall is hosting a multinational staff consisting of representatives from Argentina, Brazil, Colombia, and the United States throughout the deployment. The team will focus on operating in a multinational environment, while ready to deal with unconventional threats such as illicit trafficking, improving training levels in a variety of mission areas, and responding to humanitarian crises.

“This deployment provides a unique opportunity for U.S. and partner nations to increase our interoperability by working together as a multi-national staff for a prolonged period of time,” said DESRON 40 Commodore Capt. Brian Diebold. “The multi-national staff will execute a variety of missions over the coming months that will include integrating and conducting operations with the U.S. Marine Corps, U.S. Coast Guard and 13 partner nations.”

Gunston Hall will make a variety of port visits designed to promote goodwill and friendship with nations in the region.

For additional information about Southern Seas 2018, contact COMUSNAVSO/C4F Public Affairs Office by email: comusnavso-c4f_mypt_pao(at)navy.mil; or by phone: (904) 270-4843 or visit www.public.navy.mil/comusnavso-c4f, on Facebook at www.facebook.com/NAVSOUS4thflt, or on Twitter at www.twitter.com/navsous4thflt.